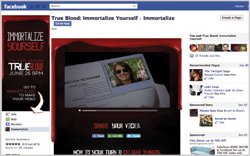 Viral video ads’ importance to brands now and in the years ahead is nearly impossible to overstate — and Atlanta-headquartered Definition 6 has firmly established itself in the top ranks of the medium’s pioneers.

Definition 6’s recent coups include its latest work for HBO: an “Immortalize Yourself” app created for the summer 2011 launch of True Blood’s fourth season. The app enabled True Blood fans who liked the show’s Facebook page to insert themselves and their friends, via an auto-populating function, into a mini-episode featuring the cast of the show, which was shot specifically for this app.

Results? More than 2.4 million page views and 50,000 new Facebook likes, with fans creating 200,000-plus videos and sharing them more than 35,000 times via Facebook, Twitter and email, during the launch window alone.  By the show’s Sept. 11 finale, visits surpassed 1 million.

Definition 6’s secret formula? In a word: context. That starts with knowing when a viral video is truly the right move for a brand, within a strategy carefully designed to “connect people and brands that are both constantly in motion,” says CEO Michael Kogon.

Kogon and CMO Chris Thornton believe passionately that shared content is the key to connecting meaningfully with consumers. Both cite Buzz Agent’s finding that a single word-of-mouth conversation has the impact of 200 television ads, and point out that the desire to share is, of course, social media’s raison d’être.

Definition 6’s shared-content-driven guiding principles also paid off spectacularly with “Happiness Machine,” Coca-Cola’s first global video produced exclusively for viral distribution, as part of its “Open Happiness” campaign. Launched in January 2010, its success carried over into 2011, providing smiles to more than 4.1 million viewers to date. It reigns as Coke’s most-shared video ever, collecting a Gold Clio, the add Awards’ “Best in Show,” and other awards along the way.

“Happiness Machine” served to spur the takeoff of Coke’s “Where Will Happiness Strike Next? (WWHSN)” campaign, driven by a Coca-Cola Facebook hub built by Definition 6, which showcases video “happiness moments” created by regional Coke divisions and agencies around the globe. The hub provides tools for sharing/tweeting about the videos, and Definition 6’s own follow-up videos include a “Happiness Truck” dispensing surfboards and other goodies in the streets of Rio de Janeiro, generating 1.5 million views since mid-February.

The WWHSN hub, now featuring 50-plus videos, has helped increase “likes” for Coca-Cola’s Facebook page (which jumped from 22.6 million to nearly 40 million between February and November 2011).

The “Happiness Machine” and “Happiness Truck” videos are “great ideas, brilliantly executed, delivering value to our brand and our consumers,” says Wendy Clark, Coke’s senior vice president for integrated marketing communications and capabilities. “In this evolved media world, where content must be what we call ‘liquid and linked,’ we rely on our partners to deliver fresh thinking that travels across media, while building deeper connections between our brands and consumers. Definition 6 gets this, and continues to push the bar with innovative ideas.”

Indeed, Kogon emphasizes that the need to unify so many elements to produce shareable content demands that clients and agencies work together more closely than ever. The make-or-break element, he adds, is “bravery and risk-taking tolerance on the part of both the client and the agency.”