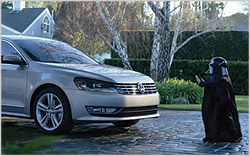 From iAds to the Dark Lord, Deutsch brings big ideas to life

If the well-established, full-service advertising agency Deutsch proved anything this year, it’s that creative digital content isn’t solely the province of upstart digital-only shops. In fact, Deutsch, which has offices in New York and Los Angeles (each with its own roster of clients), is behind some of the most innovative digital work currently out there.

To wit: Deutsch New York produced a Windows Azure iAd for Wired’s iPad magazine that allowed programmers to not only see but tinker with the iAd’s code; hooked teens on a gesture-based, Green Lantern-inspired online augmented-reality challenge for MilkPEP; and scored interest in DIRECTTV’s NFL package with a Web site and trailer promoting a fake TV series called Football Cops starring Peyton and Eli Manning.

Out on the West Coast, Deutsch Los Angeles formulated a campaign for the htc Sensation 4g that enabled Android smartphone users with the Google Goggles image-recognition app to point their devices at print ads, billboards and even a tv commercial to unlock more information and freebies; devised a free Volkswagen Passat Road Rules app full of classic road games that can be accessed without an Internet connection; and offered face time on a Times Square Volkswagen Beetle electronic billboard to anyone who liked Beetle on Facebook.

While technology was creatively employed in the aforementioned efforts, Deutsch New York chief creative officer Greg DiNoto says that strategic and entertaining ideas were at the core of each success. “We encourage our creatives to think from the standpoint that the idea comes first — before technology, before any other consideration,” says DiNoto, acknowledging, “and that’s a challenge today with all this gadget love.”

As busy as Deutsch is in the digital space these days, there are still plenty of clients who go to the veteran agency for TV commercials, and Deutsch Los Angeles delivered entertaining and imaginative spots for the Volkswagen Passat and PlayStation this year. Volkswagen’s “Darth Vader” tapped into everyone’s inner child and the premise that anything is possible if you believe; PlayStation’s “To Michael” was a truly epic tribute to gamers.

“They’re not only making some great ‘big ads,’ but also using the Internet properly to seed and get them out into ownable culture, the [“Darth Vader”] spot being a great example,” remarks Benjamin Palmer, cofounder and CEO of The Barbarian Group.

“Darth Vader” was actually released via the Internet prior to its Super Bowl debut. The agency spread word of the spot to Star Wars fans, and it garnered 10 million views on YouTube and tons of buzz before the big game. (“Darth Vader” has gone on to achieve a staggering 44 million YouTube views to date.)

PlayStation’s “To Michael” also racked up 10 million views on YouTube — thanks in part to PlayStation spokesman Kevin Butler’s social media popularity — before it hit the tube.

“From a digital point of view, neither of these two things is particularly digital. Yes, they were celebrated and enjoyed online, but so is everything. It’s just a platform,” muses Deutsch Los Angeles chief creative officer Mark Hunter, noting, “We’re learning — or proving — that you can also use digital for non-digital ideas.”