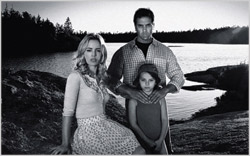 Talk about punching above your weight class: Campfire moves like an agile bantamweight, dancing and jabbing, but packing a powerful wallop. The NYC-based shop keeps itself trim — there are less than a few dozen full-timers on board — to stay nimble.

Founding partner and executive creator director Mike Monello famously got his start as part of the team that created (and perhaps more importantly, marketed) the Blair Witch Project, and this beginning has clearly informed the agency Campfire became — one known for upending the concepts of marketing, branded entertainment and cross-media storytelling by heavily blurring the boundaries between them.

Where some might see digital tools as another distribution channel or a way to collect oceans of analytics heretofore out-of-reach, Campfire tends to see every channel — whether print, video or social — as a unique canvas for telling a single connected story. “The Internet gives us a chance to make storytelling participatory,” Monello says. “And to bring people into the story and engage them in really interesting ways — and to do that with scale.”

We live in a much different world than we did in 1999 when Blair Witch took theaters by storm and taught marketers a valuable lesson about the power of digital tools. Digital media metastasizes so quickly that you don’t have to go back nearly that far to feel like a technological dinosaur. Keeping agile is one of the secrets of Campfire’s success. The challenge, says Monello, is as much about staying on top of the tools and platforms culturally and knowing how they are being used, as it is staying up-to-date technologically. And just as important is knowing how various platforms work together. “A lot of marketers still view them in silos,” Monello says, before droning as if in an Orwellian board meeting: “ ‘We have the traditional silo, the digital silo, the social silo.’ However, figuring how best to bridge all of them and integrate all of them in ways that improve them all is the biggest challenge.”

“We’re an earned and owned media shop,” says Jeremiah Rosen, Campfire partner and president, “in that we tell stories that attract audiences. But we’ve had the benefit over the past couple of years of applying media stimulus to organic ideas and seeing a huge opportunity to reach scale at a pace that was virtually impossible in the past, and in so doing, also creating naturalistic experiences for brands.”

This approach can challenge clients, but Rosen says Campfire has been fortunate to work with clients who bring them in early enough to get the insight and access to create immersive experiences later. The end result, he says, is driving the clients’ media dollars to work as hard as they can over a long period of time.

All of this creative talk about platform-agnostic storytelling belies Campfires tech savvy and research chops. “Everything begins with exploring the behaviors of the target,” says Monello. Research starts with examining the target, finding the sweet spot, looking at what they are doing online and how they’re behaving. Only then will the team develop the idea that can be projected onto that scaffold. “The idea needs to work across any media,” Monello says. “Once we have the core idea we apply it to the media that makes the most sense for the target we’re after.”

This year Campfire tangled with an especially potentially prickly target: the fantasy fans who know every minutia of the book series Game of Thrones (and the TV viewers who were about to follow suit). Luckily the team brought an equally obsessive eye to an immersive, five-senses campaign to launch the show. “We all totally geeked out on the books when we got the assignment and read [all the books],” says Monello.

This led to one of the campaign’s more radical executions (for taste) in which chef Tom Colicchio prepared a week of Game of Thrones-inspired meals to be served out of food trucks in major cities around the U.S., no small feat when you consider that the series is a medieval fantasy. Campfire creative director Steve Coulson met with Colicchio to brief him on the various lands (each of five territories would inspire one menu per day), including everything from what the foliage would have been like and what animals would be available to the socioeconomic strata of the inhabitants. “What Tom loved about it, was the opportunity to tell stories through food,” Monello reported, “which made him such a great partner for us.”

As you can imagine by the high-wire act such efforts entail, the group at Campfire is not afraid to get kicked out of a room for suggesting outlandish concepts if they think they’re the right solutions. The amazing thing is that they don’t kill the ideas internally when it seems they’ll be hard to sell to the client. Ultimately, they don’t get booted from meetings and end up actually pulling off those impossible feats.