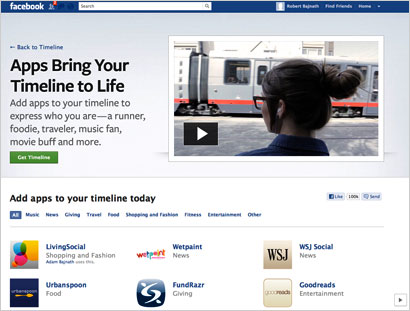 The initial set of Open Graph apps from Spotify, Hulu and The Washington Post let people tell friends what they’re “listening to,” “watching” or “reading” as default actions after giving permission once for apps to post content.

The new batch of more than 60 apps span lifestyle areas, including travel, cooking, fitness and fashion from companies including TripAdvisor, Foodily, eBay, Pinterest, RottenTomatoes and Metacafe. Among other prominent names adding apps are Monster, Foursquare and Ticketmaster. About 60 total Open Graph apps are now available, with more on the way.

“Soon, there will be apps for all types of interests, as more apps will launch over time,” stated a Facebook blog post Wednesday.

Facebook’s overall aim with the next-generation apps is to go beyond the one-size-fits-all “Like” button. It wants to automate the sharing of different social actions posted continually to Timeline, the feature being rolled out now that allows users to highlight significant life events and other activities on the profile page.

The ability to create custom Open Graph apps and the wealth of user data they could generate, in turn, leads to new advertising opportunities for marketers and agencies on Facebook.

“Brands will play an important role as these social actions will frequently be generated by brand applications,” stated an analysis by digital agency 360i when the Open Graph apps were announced last year.

It noted that the specific nature of updates will work in favor of brands. “The action won’t just say, “Todd ran,” but rather, “Todd ran 4.3 miles with Nike+.” The report further suggested that the most successful brands will be able to generate a consistent stream of “repeated branded social actions” in a user’s Timeline.

But at least one agency executive questions whether the combination of Open Graph apps and Timeline is a good fit for all marketers. “The majority of brands don’t have a great reason to be integrated that deeply into the social graph,” said Sloan Broderick, director of innovation at WPP’s MediaCom. Think Botox, for example, or scores of not-so-sexy CPG products.

Even a high-end brand (and MediaCom client) like Audi might not benefit from an ongoing stream of Timeline posts that isn’t linked to particular occasions or events like the Super Bowl. “Music I get,” said Broderick, referring to the Spotify app on Facebook -- but non-entertainment or content- related apps may have a harder time capitalizing on the new tools.

Still, that isn’t stopping a wide range of companies from rolling out new apps and “verbs” that people can choose to describe different actions. Payvment, for instance, which provides an e-commerce app that allows businesses to set up shop on Facebook, will allow merchants to add “want” and “own” buttons to their virtual storefronts. By clicking on the buttons, shoppers can add to wish lists on their Timeline.

The new Foodily app enables people to tell friends what food they “craved,” “made” or “recommend.”

Facebook is counting on brands to embrace the new capabilities it’s serving as it prepares for an expected IPO.