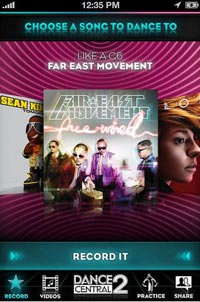 TV networks and “social TV” startups are not the only ones now trying to link the mobile phones and tablets in the living room with the big screen. In recent months, console game manufacturers have been releasing apps designed to complement or even work in concert with a-list games for PS3 and Xbox.

Late last week, Microsoft released Dance Central Dance Cam, an iOS, Android and Windows Phone app that can capture and synthesize a gamer’s dance moves into a music video. Marketers should be taking note. The second screen could be their most direct route “into the game” of consoles.

Dance Central is among the most popular dancing games for the Xbox 360 to use the Kinect motion controller. The mobile app allows players to preview tracks that are in the console game itself. But the app will also capture one or two players dancing and then remix the moves into a personalized video that can be shared with others.

Among the most ambitious uses of a mobile app for gaming, Activision released last week Call of Duty Elite on iOS. The blockbuster first-person shooter has an extensive multiplayer aspect that dovetails nicely into the functionality of an app that a player can consult when not actually playing the game. The COD elite app works in sync with the console so that the player can monitor and even analyze their performance in multiplayer contests, review recent matches and even adjust their profiles so they can be uploaded into the game and used for the next playing sessions.

Mobile complements to mainstream console and PC games have been a longstanding and largely unrealized promise of the emerging multi-screen world. Early attempts at integrating Square-Enix’s Final Fantasy role-playing series with mobile apps never came to fruition. Some modest and limited integration of Electronic Arts' The Sims games with mobile occurred a few years ago. But it is only now that console games and mobile apps exist increasingly in the cloud that the two platforms can interact more fully.

The opportunities for marketers seem obvious here. For years, I have heard agency executives argue that the real promise of gaming for advertisers is not in-game placements so much as around-game marketing. The way to get in good with gamers is for a sponsor to give them more of what the gamer loves to do -- game. Apps open up a support platform for a new layer that marketers can underwrite -- one that includes maps, hints and tips, and social engagement.