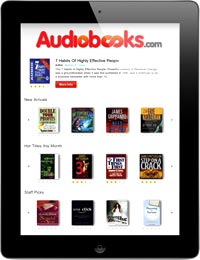 The Spotify and Netflix models of cloud-based subscriptions to digital media come to the audio book market this week with the formal launch of Audiobooks.com. Available in a Web app format for iPhone, iPod, iPod Touch and Android, the $24.95-a-month service gives members all-they-can eat (or hear) access to streaming versions of recorded bestsellers and classics.

Amazon-owned Audible.com has been the overwhelming presence in the digital audio book market for a decade with a downloadable model that prices books by the piece or in bundles of download credits. While Audiobooks had been in business with a Netflix-like mail order rental business since 2003 (and a credit-based digital model since 2005), the company had been searching for an alternative in recent years.

The Audiobooks.com domain name recently became available again, so the company took the opportunity to relaunch its site under a different subscription-based model, says Ian Small, general manager. “We came up with an unlimited model and price point based on what the consumers would like. It came to a great synergy. This domain was open to us, which put a stamp on the brand and gave us new ideas for utilizing the cloud for unlimited access.”

The Audiobooks.com subscription requires no commitment, so members can drop it at any time. A 7-day trial is also available for testing. Small says that Audiobooks.com is not seeing book publishers resist the subscription model in quite the same way many music publishers have been reticent about all-you-can eat services. “They are pretty open to trying new things,” he says. A long testing phase included a downloadable model that monitored how many titles people would use if they had unlimited access. “On average people consume about three audio books a month,” he says. “Which is not much more than the Audible plans.”

Most book listening is occurring during commutes, and there is not enough time in the day for people to abuse consuming titles that can take ten or twenty hours each to finish. The value add for the consumers is that an unlimited plan reduces the risk of getting a book they don’t like. Small says that about 20% of members are proving to be “dabblers” who listen to pieces of works and abandon them for something else. Nevertheless, Audiobooks.com bears the cost of the dabbling, since it pays a royalty to the publisher whenever someone accesses a title.

A cloud-based streaming approach does introduce issues of bandwidth and data usage coming up against people’s data plans, so in this Web app iteration Audiobooks.com will be monitoring data streams and may be able to utilize variable bit rates to minimize the data load. But the streaming model also gives the company unique insights into usage patterns that a downloadable model does not. Small says the company is collecting data from this first Web app version to offer publishers as well as to provide guidance for the development of Apple and Android apps in coming months.