Hyundai To Entertain In Super Bowl 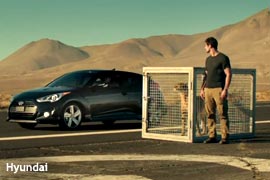 Audi, Acura, Hyundai, Kia, Chevrolet, Lexus, Cadillac, Chrysler, Volkswagen, Suzuki, Honda (putatively with a "Ferris Bueller"- themed ad complete with Mathew Broderick) and Toyota are the automakers in the Super Bowl this year. Many have already shown bits and pieces of their creative, and some already have their ads on social video channels.

Hyundai until now has been mum on its creative, saying that the ads will take a new direction less focused on establishing the brand's bona fides and more on entertaining.

While in the past Hyundai has tended to hammer home messages about vehicle durability and reliability, and also (during the recession) programs like Hyundai Assurance, the automaker is doing more humorous creative this time. The two ads for the Veloster Turbo, as well as a brand advertisement right before kickoff, all use humor to get the message across.

For the latter, a 60-second spot in the ad pod shoe-horned right before kickoff, the company is doing a slightly more offbeat approach than what it did in last year's game: feature real employees at its Montgomery, Ala. assembly plant for the Sonata sedan.

This year the ad shows that facility and its people, but they are in an absurd elaboration of Hyundai's take on "If at first you don't succeed... ." In the ad, via Innocean Americas, a designer is struggling to solve a tricky design point on a Hyundai vehicle when his supervisor shows up at his cubicle. Instead of words of encouragement, the guy begins humming the theme from “Rocky.” Then other employees in the office take up the song, and then all of the people in the assembly plant start humming it as they build Sonatas. Soon everyone is singing the theme, marching out of the plant, into the offices and surrounding the guy, who after hearing the anthem says he'll give it another shot.

One of the two in-game Veloster Turbo ads posits a race between a cheetah and the Veloster Turbo. It shows the car on a desert highway, sere mountains in the distance. Beside the car and its driver is a cheetah in a cage, and beside the cage, the cat's handler. As the car takes off down the road, the handler opens the door to the cage and the cat leaps after the car. The car is way too fast, so after a futile second or two chasing the car, the cat gives up, and turns to look at the trainer, growling. The latter's expression changes to one of consternation, then terror as the cat decides he's an easier meal target. As Hyundai's voiceover guy, actor Jeff Bridges extols the virtues of the car we see the handler run back and forth, chased hither and yon by the cat.

The third spot is meant to tout the turbo Veloster's low-end torque in forward and reverse. A young man is driving with his much older colleague on a business trip as the older guy is telling the young man the secret to success, for the millionth time. But before he can tell the young driver that secret word, he has what looks to be a minor cardiovascular event or stroke (if such a thing can be minor). The young guy handles it by quickly throwing the car into reverse, then forward, then reverse again a few times until the old guy is shaken out of his -- whatever it is he's in.

Humor is, of course, stock in trade for Super Bowl ads, and almost all of the automakers except (so far) for Cadillac are going for the funny bone to some extent. Kia, in a racetrack themed ad, is channeling male and female fantasies in an ad for the Optima sedan starring everyone from Mötley Crüe to mixed- martial arts star Chuck Liddell and a Victoria's Secret supermodel.

Audi's Super Bowl ad offers a take on hip young party vampires at a cookout, and their friend arriving in an Audi with the drinks, a container of type-O blood. Unfortunately, the car's headlights are so strong, they evaporate the lot of them. And sibling VW is back with the “Star Wars” theme. Honda, rumor has it, is doing a "Ferris Bueller's Day Off"-themed ad starring -- yes -- Matthew Broderick, except grown up and playing hooky from work.

Tim Calkins, professor of marketing at the Kellogg Graduate School of Management at Northwestern University, tells Marketing Daily that while the automotive segment tends to change its Super Bowl creative themes every year (although there are exceptions), there will be a lot of thematic repeats. "I think this year what we will notice is how familiar the commercials are and how much continuity there is from one year to the next," he says.

For the past seven years, Calkins has run a sort of ersatz focus group at Kellogg involving marketing students who watch the big game and evaluate the ads therein based on strategic criteria. They will do the same this year for Super Bowl XLVI.

Calkins says the yearly confab judges ads based on positioning (where there's a benefit delivered by being in the Super Bowl); the strength of the link between creative and product; whether the ad has enough "amplification" to stay top of mind; and whether the ad is consistent with the brand.

"We will see a lot of similar campaigns again: CareerBuilder with chimps, the Coca-Cola bears, goDaddy.com, Doritos. What's happening is the branding is difficult and when people get equity that works, they reinforce it," he says. "The risk profile is so high in the Super Bowl that when advertisers find a formula, they stick with it."