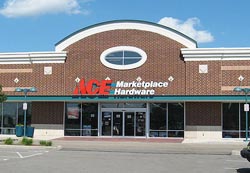 One of Solve Media's missions is to improve brand awareness for online retailers through CAPTCHA type-in ads. Using these ads, neighborhood home improvement store Ace Hardware proved it could capture attention from online shoppers who typically shop at Home Depot and Lowe's.

CAPTCHAs provide an uncluttered ad environment; often it is the only ad on the page. The ad model targets specific messages and asks consumers to repeat it back, strengthening the bond between brand and consumer to drive recall -- similar to the way writing notes help people remember.

Solve Media had focused on supporting automotive, entertainment, finance, travel and consumer products goods companies, but not retail. The results from the Ace campaign, verified by Vizu, suggest CAPTCHA works for ecommerce as well.

Benjamin Flaccus, senior digital media planner at Horizon Media, said consumers printed more than three times as many coupons this year, compared with last year, without the CAPTCHA. He said Ace has been receptive to new ideas, and the two companies have been working to develop a testing road map.

Overall, the campaign achieved higher-than-expected brand lift metrics for both promotion recall and the likelihood to shop at Ace, according to Ari Jacoby, CEO and co-founder of Solve Media. About 40.2% of consumers identified the discount on the advertised Dewalt drill, and it achieved a 116% lift for purchase intent at Ace, he said.

The campaign generated a 71% engagement with the ad; 0.50 click-through rate; 13% lift for promotion awareness; and 80,000 completed type-ins -- and it generated twice as much Web site activity compared with the prior year, and five times the click-through rate. It ran Nov. 18-26, targeting consumers who were looking for deals on home-improvement items. It aimed to generate awareness for Ace after the Thanksgiving Day campaign. A coupon offer helped drive online consumers into stores. The campaign ran across mobile and desktop sites.

Ace did not target the campaign specifically toward mobile users, but Jacoby said more companies have begun to request the ability to serve up CAPTCHA type-in ads for smartphones and tablets. He said Solve Media expects to roll out a CAPTCHA product that will be specific to mobile advertising toward the end of the year.