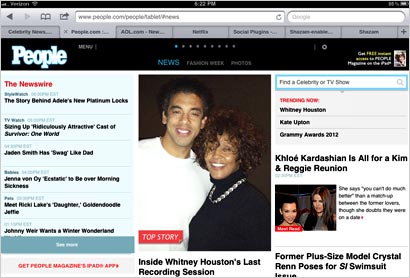 With Apple CEO Tim Cook predicting tablets will outsell PCs in the near future, and others agreeing, Web developers are taking the platform very seriously. While many media sites have become more tablet-friendly in recent months, very few have crafted tablet-specific designs.

People.com says that with 2.1 million of its monthly unique users already coming from the iPad, it has the scale to support a dedicated Web destination for tablets. The new site employs a larger interface with scaled-down top-line options -- all the better for fat fingers to navigate. In fact, the entire landing page is swipeable. The user can swipe from the main news hub through the photos, fashions, style and other major sections of the site. Photo galleries are enlarged to fill much of the tablet screen. Videos are embedded in pages. And the drop-down menus are larger, with bolder headlines that are easier to tap. Images have been rendered in higher resolution as well.

Also optimized for the tablet browser is a Unilever ad campaign for "I Can’t Believe It’s Not Butter." The PointRoll-developed rich media unit is pulled from the bottom of the browser to fill the screen. Within the unit, a swipeable slide show and embedded video deliver deeper messaging. The ad even clicks through to a tablet-friendly ICBINB landing page with recipes.

Coincidentally, AOL.com also relaunches its portal home today with a tablet-specific version. Virtually all of the oversized tile elements on the new page can be swiped to reveal more content. AOL’s Trent Herren, who leads mobile monetization, tells Mobile Marketing Daily that AOL.com is where the company still sees most of its mobile traffic -- and this new site is a first step towards rethinking Web properties in the AOL stable for mobile. “In the near term this is more evolutionary than revolutionary. There are about seven or eight different new things we put first and foremost.”

Herren says that at some of the core tech properties like Engadget and TechCrunch, AOL has at times seen more traffic coming from mobile and tablet browsers than from the desktop.