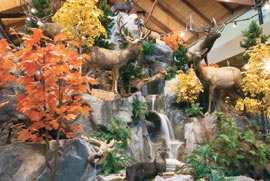 The first store with the new format is expected to open this fall in Union Gap, Wash., near Yakima. The new stores are smaller, about 40,000 square feet, and will be built in currently underserved markets. The Sidney, Neb.-based chain says it believes the new concept will work especially well in the western U.S. and Canada. Stores will target towns with populations of less than 250,000 people -- too small to support a full-sized store, but likely to have plenty of people avid about hunting, fishing and camping.

The smaller stores will include online order kiosks, as well as free shipping to Cabela's Outposts, with an in-store pickup program. Visually, the company says Outposts will still have the chain’s signature rugged outdoor look and theme, but will feature seasonal product assortments in a more flexible floor plan, which can create very different looks throughout the year. Digital signage will also be an important part of the interior layout.

"This is an entirely new concept for us, and that is what is so exciting," CEO Tommy Millner says in its release. "They will extend our footprint into smaller markets and increase the range in which the Cabela's retail experience reaches our loyal customers."

The company is also expanding its next-generation stores, with five set to open in 2012, and with three scheduled to open in 2013: Columbus, its first store in Ohio; Grandville, Mich.; and Louisville, Ky.  Each will feature a Gun Library, Bargain Cave and Fudge Shop. So far, Cabela's operates 34 stores in the U.S. and Canada.

Separately, the company turned in record earnings for its fiscal fourth quarter, with total revenue climbing 5.4% to $983.7 million, and same-store sales increasing 1.7%. And net income jumped 25% to $75 million, compared to $59.9 million in the year-ago quarter.