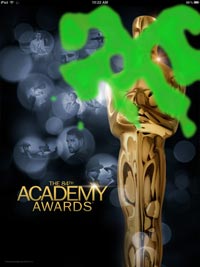 Awards shows are by their nature over-the-top affairs. From the painfully bad scripted podium banter to dance numbers with no rhyme or reason, most of us come to these shows already discounting their badness and hoping for some interesting faux pas or moments of authenticity from someone. And yet dialing back on an awards show seems just as dangerous as overdoing. There is the risk of seeming laconic and unappreciative of honor itself, although the relentless parade of these awards dilutes the idea anyway.

But when it comes to companion apps, one wonders if less is more. To wit, the Grammy Live app did pretty well just keeping the interface straightforward -- three columns by media type -- and the live synchronized options narrow. Still, if we go by the comments on the Apple App Store reviews page, many users still were upset with technical glitches. There were also a lot of consumer complaints that the app was deceptive and seemed to have promised a live telecast of the awards show itself rather than backstage programming.

To be sure, taking user app reviews too much to heart is a mistake. They tend to attract the disgruntled user more than the satisfied customer. And some complaints are just daft. I never got the impression from the Grammy app that it was going to give me the CBS telecast live, however. So go figure.

But user reviews offer interesting insights about user expectations. For instance, my first impressions of the new ABC Digital iOS app for this weekend’s Oscars telecast were fairly positive, if not overwhelming. I liked that the app is running trailers, interviews and pre-show programming that is crafted for a second screen. And yet the app itself has gotten dumped upon by users in the app Store, with an average 2-star ratings and 1-star ratings outpacing four- and five-star ratings by more than a 2-to-1 ratio.

The complaints suggest that the app may be too fancy by halves. There is no easy access to all of the nominees, many argue. In fact, they are almost right. There is a video of the nomination announcements, and a voting mechanism for picking winners and sharing picks via Facebook. And a tile in the interface does link to a list of nominees that appears in an embedded browser, which may have been added in response to the criticism. But I couldn’t find a simple list of nominations nicely formatted for the app itself -- and perhaps to serve as a checklist while watching the awards themselves.

The naysayers also find the interface just too confusing. It is a wall of moving tiles with no clear priority or overall organization. I gather from the review that people would like something more straightforward that they regard as a true companion to the show and not just a trove of video. They know how they will watch the Oscars and are looking for a handy tool that enhances their ritual, and doesn’t try to drown them in ancillary content. Maybe less is more -- even for the Oscars?

The Oscars might want to take a look at the iPad app for an unlikely rival, the Nickelodeon Kids’ Choice awards. Not only is kid voting made an integral part of the content mix, but the app is fully game-ified to encourage constant reuse.  Kids collect Nick’s signature green slime by viewing videos and exploring constantly updated new content. You are an agent helping to fill a global slime collection that show host Will Smith will be using on the show.

I think we all can agree that one thing that will liven up the Oscars telecast would be buckets of green slime.