Fidelity Uses Big Think To Get Investors To Turn, Go To Video, Share With Others 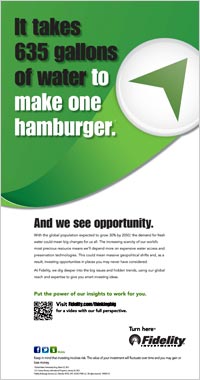 Brokerage brand Fidelity Investments this morning breaks a new campaign tagged to the theme of “Thinking Big,” but it is something that previously might have been considered a small component -- maybe even a throwaway element -- that is the centerpiece of its new strategy: Corporate videos. The videos, which feature what Fidelity considers one of its most valuable assets -- the perspective and expertise of its equity researchers -- are a recognition that the world of brand marketing has flipped in an era of social and distributed media, and that all of the big-budget advertising is merely intended to drive consumers to, and to share and redistribute, those kernels of brand content.

In fact, the campaign eschews one of the media that helped establish Fidelity as one of the top retail brokerage services in the world, with an estimated 20 million accounts: TV. In its place, Fidelity is running a series of provocative print and online display ads, featuring compelling headlines, and copy all intended to drive traffic to a microsite serving the videos, and to use a variety of “buttons” to like, tweet, and share them with others via what seems to be now becoming the most important medium in the ad industry: social media.

All of the videos will be like the first one, which features eye-catching copy intended to spark a user to learn more. The head in the first execution reads: “It takes 635 gallons of water to make one hamburger,” followed by the kicker: “We see opportunity.”

While that campaign might be evocative of a corporate sustainability effort like GE’s “ecoimagination” ads, Speros says the effort is not about corporate social responsibility per se, and that the executions -- a total of “six to eight” this year -- are really about the second part of that message: the opportunities that come from listening to Fidelity’s advice to investors.

Fidelity will continue utilizing its well-known “Turn Here” tagline as its overarching brand position, but by focusing on the people who advise investors where to turn -- the securities analyst who can turn water conservation into investment opportunities -- Speros hopes it will spark the kind of grassroots consumer buzz that most marketers now pray for.

“The role of the print is to pique your curiosity,” he explains, adding: “All good advertising has to stop you and get your attention.”

In other words, the goal of the ads is to get consumers to turn there.