Wow! How Many Second Screens Would It Take To Make That Oscar Show Interesting? 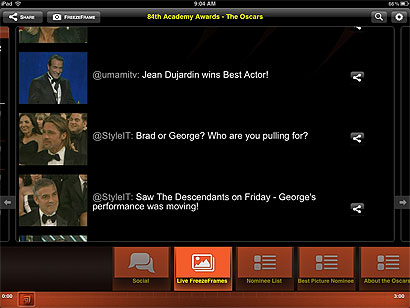 Last night was one of those times when you thank the smartphone and tablet gods for giving us alternative screens in the living room. When TV gets this boring, we need distractions…badly. How ironic that the Academy chose this of all years to spend much of its time hammering home the unique experience of moviegoing…just when the industry seemed determined to demonstrate that it was becoming as culturally uninteresting and irrelevant as music.

The two fine but uninspired films about films, “The Artist” and “Hugo,” that carried the night underscored the self-referential tedium of it all. The relentless Scorsese hosannas from winners were so fitting for the night. The most overrated and self-conscious director alive gets his props. Eeek! Cue the obligatory Marty crane shot into the iPad.

In dancing around ABC’s own Oscar second-screen app, Yahoo’s IntoNow and the recently updated Umami (all for iPad) it struck me that all three of these second-screen experiences really added up to one good one. Each had promising and well-wrought TV enhancements. None kept my interest throughout.

As it did last year, ABC Disney leveraged its proprietary access to the event itself to deliver the most ambitious second-screen programming, complete with six backstage cameras and dedicated talking head hosts. It turned out to be the app I used least. ABC did some things right, in that it had a default fully programmed single-screen view that didn’t require the user to dance across the six cams. Many of these apps have had the problem of requiring the user to manage too much. But instead we had to suffer the talking head banter of two second-screen hosts. Ugh!

I was left wondering who this really was for, anyway. Who would want a fully programmed parallel experience while they are watching the TV? I turned down the sound on the iPad to avoid two tracks running at once. You don’t really want two TVs in the same room. The best perspective on the backstage turns out to be the mobile cam that followed winners down the “winner’s walk” as they encountered a follow-up interview, an official photography session and then the press. This would have been sufficient, because it communicated an interesting alternate view without the need for sound.

IntoNow excelled at interactivity. The feed from Twitter itself was overwhelming, but the homegrown discussions among IntoNow users were more manageable and allowed you to track conversations easily. The near-real-time feeds of fashion images straight from the Red Carpet were better -- allowing people to vote on what they liked and disliked. Polls through some of the telecast asked people to respond to their favorite presenters, etc. And the app had a full slate of nominees available for voting. A second screen that requires minimal tending, but very quick and easy interaction, seems to be the way to go.

Umami’s newly introduced social media features were the ones that stood out for me last night. As CEO Scott Rosenberg mentioned at our Tablet Revolution show last week, one of the challenges of “social TV” apps is the torrent of material coming off of the Web. Umami issued a revision in advance of the Oscars that tries to visualize and contain social feeds. It only works partially. A graph of social activity added nothing to the experience, and many of the highlighted “trending tweets” were not actually about the Oscars. A tabbed interface called out key hashtags around the events as well as celebrity tweets and Billy Crystal’s own feed. But only two of the tabs were interesting to watch. The feature needs tweaking and more proactive programming, but it was headed in the right direction.

But Umami did have the most engaging innovation in its Freeze Frame feature. Here the user is able to grab a frame from the telecast itself (Umami is monitoring the audio and video streams) and Tweet a comment around it. Although the stream had only a handful of users using it, I found this especially fun to watch and use. It tied the social interactivity to a visual element from the telecast. It allows the user to actually backtrack through recent frames to grab just the right image. One person got Angelina’s leg flash on the Red Carpet. Others tweeted ads. This turned out to be the social stream I was most interested in watching -- other people being able to stop the camera and say, "look at that."

Which is more than Hollywood did last year and last night. If the movie industry wants us to revive our flagging interest in their medium, they need to do more than fill an Oscar show with PSA spots on how great moviegoing once was. They need to start making movies we really want to talk about.

I kept wishing that the best aspects of each app -- proprietary content, quick polling and images, and smarter social streams -- were available in a single app.