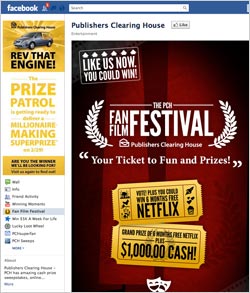 Facebook has become an organic acquisition channel for Publishers Clearing House Online, which may drive up engagement rates. The higher the Fan count, the faster the number replicates. The company gains on average 1,500 Fans daily, compared with 150 a year ago. Every 50,000 Fans create a measurable increase in engagement, according to Josh Glantz, PCH Online VP/GM.

On Thursday, PCH will award its first Facebook PCHsuperfan double their initial prize money. The contest has been one of the company’s most successful Facebook acquisition programs to date. Glantz attributes the PCHsuperfan program and success from Facebook to Kenn Gold, who joined PCH Online as the director of content development in June 2011. "There's a bit of cost to us because we use our own email list, but not much," he says.

PCH began posting comments like "Who would be the first person you'd call if you won at Publishers Clearing House?" At the time, the site had 50,000 Fans. The post generated more than 5,000 comments, according to Gold, who said the challenge is generating new ideas to get people to think about winning.

Social media and online advertising didn't always work for PCH. Today, paid search earns PCH about one-third of its Web site traffic and customer acquisition, up from 10% about 18 months ago.

PCH began social media a couple of years ago, spending virtually nothing on media to grow the Fan following. The company ran one sweepstakes through a third party to test Facebook's rules, and then took everything in-house.

Gold said PCH launched a Google+ business page in December, but not many of its members visit the site. The company in January also attempted to generate a big push into Twitter, but its Facebook Fans wrote on its wall: "We're not on Twitter -- we're on Facebook."

While Gold said it manages to generate Fan engagement and acquisition without advertising, research firm eMarketer expects Facebook's global advertising revenue at Facebook to grow 60.5% to $5.06 billion this year, accounting for 83% of total revenue. By 2014, Facebook should generate $7.64 billion in ad revenue.