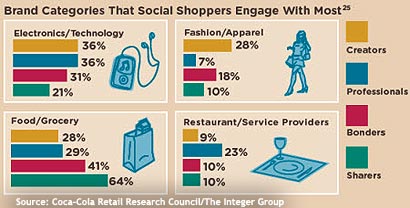 A new study from Coca-Cola Retailing Research Council of North America and The Integer Group defines four types of social media “personas” and key insights about how they engage with brands and shop.

This is the third installment of a five-part study called “Untangling the Social Web: Insights for Users, Brands and Retailers,” based on a new quantitative survey of 308 frequent social network users and one-on-one live interviews with 40 respondents conducted by Integer in conjunction with iModerate research technologies, qualitative shopper research conducted by Integer in conjunction with Qualvu, interviews with experts, and data from other leading researchers.

A summary of the types and some key insights:

1. Bonders: This type loves to create and cultivate relationships with family, friends and work colleagues. They view themselves as fun, sociable and connected, and often host or plan events. Their main motivations for using social media are keeping up with what’s happening in others’ lives, sharing their thoughts and ideas, and initiating introductions among those they know. Bonders are more likely to be female and under 40 than the other persona groups, and 63% are employed full- or part-time.

They use Facebook most often, and have been doing so for the longest among the four segments (44% have been on Facebook for three years or more). They place great stress on staying connected, and check in frequently with family and friends on a typical day. Two-thirds use mobile phones to stay connected from anywhere, and this is the segment most likely to use mobile phones to connect to social sites to “pass the time.”

Nearly half (47%) spend one to two hours per day on social sites, while 25% spend three to four hours and 28% spend less than an hour per day. None reported using such sites just every other day, as opposed to daily.

2. Sharers:  Sharers like to spread the word on what’s going on in their lives and circulate information that they hope will benefit people they care about. They are kind, sincere people who put primary importance on building strong relationships. They skew older and female, and about half are employed full- or part-time.

They spend most of their social time on Facebook viewing others’ status updates and posting comments, but also like to explore blogs, discussion boards and other sites. They tend to log in to social media sites for one to two hours, and prefer doing so on computers rather than mobile phones (only a third use mobile phones for this purpose).

Forty percent spend one to two hours per day, 23% spend three to four hours and 31% spend less than an hour per day on social networking. In addition, 7% said they use social sites every other day or so.

3. Professionals:  While career-focused, professionals want work/life balance. They use social media for professional networking/knowledge but also for sharing opinions and relevant information. They want to be perceived as intelligent, efficient and organized. They are more likely to be college-educated, and tend to be more introverted than other segments. Three-quarters (75%) are employed full- or part-time.

Professionals leverage all social media to connect and particularly to get immediate access to information. During a given week, most browse LinkedIn or Facebook, watch videos and read blogs to stay up to date on current events, news and work-related issues. Two-thirds use mobile phones to access the sites some of the time.

However, their busy schedules limit social media time: 18% log in every other day, and 35% spend less than an hour per day on social sites, while 28% spend one to two hours per day and 20% spend three to four hours per day on these sites.

4. Creators:  Outgoing, creative, bold individuals who use social media to express themselves by originating and sharing content and to learn new things. They are more likely than other segments to be male, younger and culturally diverse.

They post content, watch videos, read blogs and browse for updates from friends and family, and most of their activity is on Facebook and Twitter. Nearly half (46%) access social sites first thing in the morning and continue social activities throughout the day. Two-thirds (65%) access social sites through mobile phones, which they view as a flexible way to create, share and learn in the moment.

One-third of creators spend three or more hours networking daily, 43% spend one to two hours, and 16% spend less than an hour. Eight percent log in every other day.

*Engaging with brands:  The primary reason that all types engage with retailers and brands on social networks is to get “perks” and deals, although sharing information is also important.

-Food/grocery brands:  Fully 64% of sharers and 41% of bonders engage with these brands, while 29% and 28% of creators and professionals do so.

-Restaurants/service providers: Professionals are the biggest engagers (23%) with these categories, compared to just 9% to 10% of the other three personas.

-Electronics/tech brands: Creators and professionals engage most with these brands (36% of each of those groups), although 31% of bonders and 21% of sharers also do so.

*Shopping insights:  The quantitative survey found that 53% of medium to heavy social media users had made an online purchase within the past week, and 58% had researched a product online that they planned to buy.

In the qualitative research, social networkers were asked about their shopping behaviors in the context of Integer’s Shopper Continuum, which describes three distinct phases of shopping behavior: Pre-Tail, Retail and Post-Tail.

The report details how each of these phases interact and feed back into one another, and the roles played by discovery, research, deals, in-store social networking and after-purchase networking.

The research points to several best practices for brands and retailers for maximizing social engagement and leveraging the shopping continuum or cycle:

*Give users a reason to ‘like’ you – a coupon, code for free shipping or discount or other perk that shows appreciation and reciprocation for their ‘like.’

*Be subtle and personal with messaging. Users understand that they will receive marketing messages when they ‘like’ a brand, but messaging should be personal and avoid coming off as a hard-sell.

*Engage with coupon sites. Offering brand coupons directly to the coupon sites and coupon-related blogs followed by many social users increases exposure. This is particularly true for CPGs and grocery retailers. Daily deals on Groupon and LivingSocial are also shared frequently.

*Stick with it. Once a brand begins to engage with social network users, it’s critical to continue that engagement consistently. Sporadic efforts can make engagement fall off and hurt brand image.

The first three parts of the report and an introduction to the study are available for free downloading on the Coca-Cola Retailing Research Council North America site.