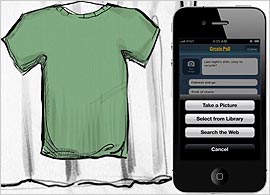 Ask.com launched a free mobile app that allows anyone to create a poll, representing a change of culture at the question-and-answer search engine.

Pictures can accompany each poll, whether snapped from the smartphone's camera or chosen from a library of images. Friends can share the polls on Facebook or Twitter.

Location-based services allow the user to see what others nearby think about any question, such as a favorite restaurant or clothing store. The PollRoll app provides a place for comments.

While the app provides a bit of entertainment for those willing to download it on their iPhone, it really represents Ask.com's move toward creativity, similar to the culture found at Google, Facebook and Twitter.

The PollRoll app emerged from a hackathon, one of several mobile applications the company is pursuing. A second screen app to support television will likely emerge as the next series of mobile applications. Ask.com CEO Doug Leeds said the entertainment focus surfaced from feedback on the Q&A site, along with the need to help employees become less afraid of innovation and sharing their ideas.

Leeds set out to change the culture of the company. "I needed to find a way to plant seeds and challenge employees to come up with new ideas," he said. "Ideas were stagnant. People were afraid to speak up."

Since October, company employees, nearly 300, meet each Friday afternoon in groups for business-related improvisation classes to stir their creative side. The PollRoll application is the first born from one of those sessions.

That change in culture may have prompted both analysts and users to jump-start the search engine. Core searches and revenue for Ask continues to climb.

Citi Group analyst Mark Mahaney published a report in January explaining how the company's revenue grew 22% in Q4 compared with the prior year's quarter -- slightly less than the 23% it grew sequentially. He put a "buy rating" for Ask's parent company, IACI, based on its search business.