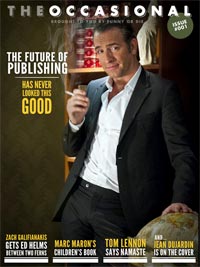 Most American boys can recall when they discovered there really was something much, much funnier and hipper than MAD magazine. For some of us it was National Lampoon during its great 70s run, for others the fleeting SPY of the 80s.

You get a bit of that sensation from FunnyorDie’s foray into digital magazines. Its newly launched and bimonthly (maybe) The Occasional is another instance of a Web-only brand using tablets to craft more print-like experiences. AOL’s Engadget has a weekly Distro app that aggregates and recasts its best Web content.

But in the case of the The Occasional, this is the FoD crew creating wholly new material expressly for the digital zine format. In fact, it is distributed in the iOS Newsstand for $1.99 an issue or on a subscription basis.

Rather than the usual videos of the famous site, this edition has text pieces, a good deal of interactive funny features, and a good selection of cool humor ideas that are expressly designed for tablet interfaces. The editor's letter proclaims: "Oh S**t! We Started a Magazine." They claim that this looks nothing like a typical magazine for a very good reason. "We have no idea what we are doing."

In fact, this works because The Occasional does feel mostly like a magazine. Or at least it feels a lot like what "digital editions" of magazines now have become. Just try to get through a few pages of Wired's tablet version without something moving in on you.

The magazine starts by mocking the digital edition instructions that often front most magazine apps and has a cover of Oscar winner Jean Dujardin, who isn’t even featured in the issue. We get audio Yoga instructions from a fast-talking instructor no one could follow. In the tradition of fearless humor mags, we get things like Rick Santorum’s “Simple Steps to Making Love to Your Wife” and an interactive maze for kids with a drunk or stoned narrator dressed in some kind of green vegetable suit. A great draggable timeline pulls Mitt Romney through his presidency, showing how he will age on a box of Just for Men. An ad for candy cigarettes uses stylish children with guns. And we get movie reviews that render the weird lessons learned from recent releases. From The Woman in Black, we should learn never “to vacation with your son in the village where all the kids kill themselves.”

Humor magazines are a hit-or-miss affair, as is most humor. The Occasional is more funny than not and a pleasant surprise on the iPad. It is part of an interesting phenomenon: Web media discovering print, in a manner of speaking. Humor is tough to pull off in a Web browser. Funny videos can control timing and the fill the frame, all critical to getting a laugh. It is noteworthy that MAD, National Lampoon and Cracked have all found a life online. In each case, videos, animation or cartoons form their most effective material.

Satire of the sort FoD offers here seems to work best in a print-like world where turning a page can still immerse the reader and shock them as well.

UPDATE: We misnamed the weekly Engagdet tablet magazine as "Distimo" in an earlier version when in fact the name of the tablet mag is Distro. We apologize for the error.