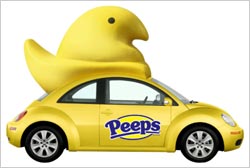 Americans are in the mood for marshmallowy chicks, jellybeans, and new spring outfits, with the National Retail Federation predicting an 11% jump in Easter spending this year.

Total Easter spending is expected to hit $16.8 billion, or about $145.28 per purchase, compared with $131.04 last year, despite big jumps in gasoline prices.

Candy is far and away the most popular seasonal purchase, with 89.3% of the respondents planning on spending more than $2 billion on traditional favorites. Per person, that amounts to about $20.35, up from the $18.55 spent on confections last year.

And brands are going all out to woo those shoppers. Peeps, marketed by JustBorn, based in Bethlehem, Pa., says it is touring the Midwest and South with its Peepster “chick” car, “sharing random acts of sweetness” and Facebook updates of the tour in such cities as Chicago, Memphis, Dallas, Houston, New Orleans, and Atlanta.

And Jelly Belly has built a 10-foot replica of Chicago's "Cloud Gate" sculpture, made entirely from 120,000 Jelly Bean Chocolate Dips, and is displaying it at the Jelly Belly Visitor Center in Pleasant Prairie, Wis., through May 1.

The NRF survey, conducted by BIGInsight, also reports that consumers are keen to go clothes shopping, with 48.5% planning to spring for some new duds, spending $3 billion.

In good news for department stores, shoppers say they’re coming back, with 42.6% of the survey declaring plans to shop there. (The NRF says is the highest in the survey’s history.) Discounters are still the main destination though, named by 63.5% as the favorite place to shop for Easter.