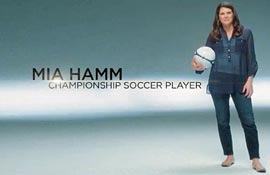 It’s the first time the retail chain has used athletes in its ad, and the “Shop to Win” campaign follows the three athletes as they experience the store’s fashion assortment, brands and value. Aimed at value-conscious women who are seeking style, the campaign is running on primetime TV, digital and social media, Kohls.com, and radio. In each spot, an athlete sits in talk-show mode, explaining the thrill of competition, and of performing “in the zone.”

“I get pretty excited when I score,” confides Hamm, who then explains that she means finding a leopard-print bag on sale. “The adrenaline rush….it’s addictive,” says Vonn. “I’m not talking about skiing. I’m talking about shopping.”

The Menomonee Falls, Wis.-based chain say it expects the ads to appeal to deal-seeking women who pride themselves on their ability to track down savings and pounce on deals, and see shopping as something of a blood sport.

Additional footage will show each athlete in “haul” mode, showcasing her favorite items and highlighting things she found on sale.

Separately, Kohl's also announced a new “American Idol” line, called Authentic Icon, beginning next month. The “AI” line, positioned in the junior's and young men's departments, will be available in Kohl's stores through June, to coincide with the show’s 11th season. Kohl's will be the exclusive retailer and support the brand with marketing such as national advertising, in store graphics, online and digital media, direct mail and public relations.

The chain, which had a rough holiday season, recently reported a 2.1% decline in comparable store sales in its fiscal fourth quarter, but says it is continuing to see “considerable brand excitement for its Rock and Republic, Jennifer Lopez and Marc Anthony brands, and expansion of the successful Elle and Simply Vera Vera Wang brands into new categories."