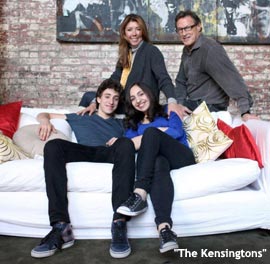 A shout to film students: forget that dream of making a feature-length, modern-day version of “Lady Chatterly's Lover” set in Beverly HIlls. Do commercials and music videos, that's where the money is. How do I know? Because I was in the SoHo house of Marcus Nispal on Wednesday.

This is the guy who helmed the (not) highly acclaimed "The Texas Chainsaw Massacres" remake and maybe the 17th "Friday The 13th" movie. But he also shot a mess of music videos, and that's where the lettuce is. Dude, you don't have to be an artist to get that SoHo loft with the Olympic-sized pool.

That he also happened to have directed a late-1990's launch commercial for General Motors' OnStar division is serendipitous because his five-story house was the site OnStar chose to unveil its new Family Link feature.

To demonstrated Family Link in situ, OnStar introduced the Kensington family -- played by actors -- who showed how the new $3.99-per-month service does things like help subscribers locate their vehicle and sign up for location alerts. It also happens to be the first à la carte service offered by OnStar.

The company had a beta with 4,500 subscribers, and is initially offering it to "the most engaged" group of its 6 million subscribers, per Vice President of Subscriber Services Joanne Finnorn. She says the service will roll out to all U.S. subscribers by year's end. "About 20% of subscribers will get [invitations] by mid-April and then we will invite the entire base," she says, adding that the various features of OnStar get used about 3 million times per month.

OnStar's most recent extension was OnStar Remote, which puts the platform's functionality on tablets and smartphones.

The company also demonstrated how it might expand OnStar with technology that integrates a car with at-home digital devices: A Chevrolet Volt in the garage with Verizon 4G LTE onboard was linked to at-home and mobile WiFi, so content like games and movies could be automatically downloaded to interactive front- and second-row screens. The fictive Kensington family (preparing for a faux trip to Delaware) showed how both a movie on the big screen in the living room and an in-process game of "Angry Birds" could be downloaded to separate interactive screens in the car, and how content can be moved from screen to screen with the swipe of a finger. The family also demonstrated how one could Skype to and from the car. In this case, the father Skyped his daughter to find out why she was at the location pegged by the Family Link service.