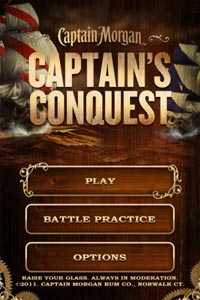 As a teetotaler I don’t even know how Captain Morgan’s alcohol brew tastes. Worse, as a middle-aged husband and father of a 20-year-old daughter, the rakish young male at the center of its brand image turns me off altogether. But I will give the pirate his due. He makes a damn good branded mobile game. And that is saying something. The Captain’s Conquest game for Android and iPhone is genuinely engaging and fun, while much of advergaming is still a matter of slapping logos on crappy and tired white-label game engines. This is one of the brand’s first journeys into mobile waters, and it bodes well for the brand.

Conceived by Anomaly, which partered with London-based Unit 9 on the execution, the app wraps real-time local mapping with your social network around a simple aim-and-shoot mechanic that has role-playing depth. You call up a map that superimposes a period pirate motif onto your real neighborhood. You may run into other ships of real players or bots from the system, but there are always ships to challenge. The app taps into your Facebook and Twitter social networks if you like and even correlates the size of your ship to your influence within the network. That may explain why I was sailing a glorified rowboat.

The gameplay is genuinely challenging and fun. You aim and shoot a cannon, but have to calculate against your own bobbing atop the water and your enemy’s maneuvering. You earn points that help you buy upgrades for the boat. The social element kicks in when you elect to join a fleet and vie to become the most powerful member of the team of marauders. In between contests you make port (check in) at actual sites in your area like bars and restaurants. The app also interfaces with your foursquare account.

Coming into the mobile market with a game was a no-brainer for the brand apparently. According to Captain Morgan Marketing Director Tom Herbst, “the Captain Morgan target consumer over-indexes in gaming, primarily in mobile gaming, so from a brand perspective Captain’s Conquest just makes sense.” The social piece was important because the brand’s research showed that the target is very active, social and adventurous. “Creating a platform that rewards consumers for being adventurous in real-life via check-ins and interacting with those around them through game play is an ideal way to marry their personal life with their interaction with the brand.”

The company says that the beta tests since February show very strong user response and re-use. In the past advergames were awful, but I am not sure even the brand minded. If the curious player picked it up and tried to sled the chocolate bar down the ski slopes or bowl with gum drops, then even those few minutes amounted to more engagement than an advertiser usually gets from a banner or interstitial.

The Captain Morgan game is that rare instance where the branded game app actually pulls you in on a number of levels. Just seeing who in your area is using the app or checking in at actual hot spots is interesting. Being part of a fleet adds the competitive angle. But at core it is all about the essential game play. In the end the branded game needs to put the game first. This one is genuinely fun to play, and it is unique. This is not a skinned driving game we have played ten times before. The game is aligned with the brand but also unique.

Captain. I haven’t a clue what you liquor tastes like. And if one of your customers gets within a yard arm of my daughter I will run him over with my badass Mini Cooper. But you know how to mix a good game.