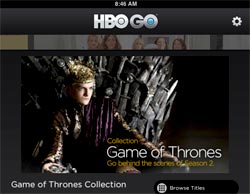 Until this week the key value add of HBO’s enormously successful cross-platform app HBO Go was found in its archive of new and archived episodes from the premium network.  But with last night’s (April 1) premiere of Game Of Thrones, Season 2, the iPad version of the app will now offer enhancements to the time-shifted episodes of the show available in the app soon after live airing.

While watching each new episode of the series in the app, users can opt in to seeing an “alert feed” of synchronized content that is timed to the current scene. Additional content will include scene commentary from cast and crew, including novel series author R.R. Martin. Behind-the-scenes interviews, character descriptions, explanatory back stories on scenes and characters and a map of location in the fantasy world will also be in the feed. A guide to the politics, set art, stills and other material will be in the feed. Turning the iPad into portrait mode during episode playback activates a map of the world.

Some content can be shared via social networks. While much of the enhanced content in the app has been available to viewers of HBOgo.com for a while, the iPad app experience adds social connectivity that will send status updates about your viewing of the episode.

The app is designed to pause the playback of the episode whenever a user accesses complementary material. In some ways, the HBO Go enhancements turn the iPad into a portable Blu-ray/DVD playback machine where "extras" are more seamlessly integrated with the viewing experience.

HBO Go has been a considerable success for the premium network. It offers subscribers deep access to the full archives of the channel’s long history of shows as a value add for maintaining their subscription. HBO positions this as a hedge against “cord cutting,” by keeping its subscribers happily super-served with exclusive access-anywhere content. The HBO Go service is available not only on smartphones and tablets, but also via the Xbox game console and Web. HBO officials have said in the past that 55% of HBO Go app downloads are available to the iPad, with smartphone downloads equally divided between iPhone and Android.