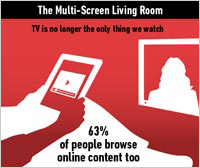 On the eve of its digital video upfront bonanza at the end of this month, Digitas released new research on the engagement possibilities in online video. By sharing the data prior to the two-week upfront marketplace called The NewFront  that boasts presentations from Google, Hulu, AOL, Yahoo, Microsoft and even NBCU, Digitas is aiming to prime marketers to spend more in online video this year, either as part of their overall TV buys, or by peeling off money from TV and moving it to the Web.

The Digitas study was conducted in partnership with Harris interactive late last month and found that 46% of online video viewers said that if an online video mentions a new product or brand, they're likely to look that brand up afterwards. Also, about half of consumers who follow brands on social channels said if a brand posts a video online they are “somewhat likely to watch it.” (As an aside, “somewhat likely” is not a terribly encouraging combination of words to my ears, but I will say that if a sliver of those consumers watch a posted video, the brands are doing well).

The research also showed that consumers often engage in both mediums — TV and the PC — simultaneously. About 63% of users have looked at online content while watching TV, with that number rising to 71% for adults 18-44. About one-quarter said the online content they looked at was related to the show they’re watching, a promising figure that speaks to how platforms can work together to enhance viewer loyalty and engagement.

Finally, 53% said that if their favorite celebrity announced that they were starring in or launching an online video or web series, they would check it out. That last finding is not surprising, but it also underscores a key learning that brands increasingly have gotten hip to over the last year. This may seem obvious but few adhere to it — if you can land a familiar face for your branded video, DO IT.