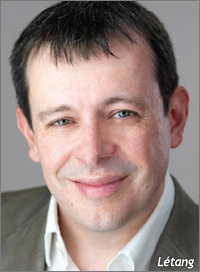 With so many consumers switching to online video services, cutting the cord and turning their noses up at current TV programming, it’s hard to think that advertisers’ TV budgets will be left unaffected for much longer. In reality, TV ad revenues are up, live programming is stronger than ever, and the upcoming elections and Olympics are setting TV ad spending up for a strong year. But what of digital? Vincent Létang, MAGNAGLOBAL’s executive vice president and director of global forecasting, recently sat down with MEDIA to talk about the brave new world of TV.

What is the current state of TV ad spending? Projection for 2012?

In 2011, television companies’ advertising revenues were $58.4 billion. That is a third, 33.6 percent, of the total advertising market in the U.S. The share of television has gradually increased since the early 2000s, mostly due to the rise of cable networks. National networks attract 66 percent of the revenues against 34 percent for local television. Broadcast television — national and local — represent 55 percent versus 45 percent for cable television.

For 2012, we predict TV revenues to grow by 6.8 percent, but a lot of that growth will be driven by the periodic events that generate incremental ad spending in quadrennial and even years: elections and Olympics. The 2012 election cycle will generate $2.5 billion just for local broadcast TV which gets the bulk of the bonanza, which will be an all-time high. The Olympics will generate approximately $600 million for national television. Without the $3.1 billion of extra revenues, TV growth would only be 2.4 percent in 2012.

How will companies like Hulu and Netflix impact TV ad spending in the future?

So far, Netflix does not carry any advertising, so it “competes” with traditional television for viewers’ time, not for advertisers’ money. The 21.7 million Netflix household clients who are streaming — out of 25 million clients — streamed an average 93 hours in Q4 of 2011. That’s 2 billion hours during the quarter. Compared with the total U.S. population, that’s only 2 percent of linear TV viewing. Netflix streaming subscribers stream approximately 7 hours a week compared to 34 hours of TV viewing for the average individual — a mark that is stable by the way. That’s a lot, but it would be a mistake to think Netflix streaming comes entirely at the expense of traditional live linear TV viewing. Some of it replaces DVD watching, some of it DVR replay.

More fundamentally, Netflix is only a substitution for library content and scripted genres drama, sitcoms, movies, kids programs; as long as networks are able to attract the best talent and release the most attractive new shows every season, they will remain at the center of family entertainment. And despite the efforts of some over-the-top players to launch original production like Netflix’s Lilyhammer, it will take many years for them to create a talent ecosystem. Besides, live unscripted programming sports, reality TVis more popular than ever and remains a stronghold for traditional TV viewing.

As for Hulu, that’s a catch-up destination and broadcasters control the platform, so it’s not likely to grow beyond what its sponsors think is maximizing the total ad revenues of a given show. Finally, native online short video content, e.g., YouTube, are mostly “snacking” and not really competing for primetime TV viewing. Fundamentally online or mobile video consumption is mostly incremental — sometimes simultaneous — to television in terms of viewing patterns.

Overall, in the foreseeable future, we believe Over-the-Top-TV is more likely to impact the multiple system operator business than the free, ad-funded TV business. That is through cord-cutting: new households not subscribing to cable or satellite TV and relying on OTT and over-the-air broadcast TV instead, for either budget constraints, lack of interest or change in consumption patterns. We forecast 10.5 million households will become OTT/OTA households by 2016.

Overall, digital media do compete with television for advertisers’ budgets but, at the same time, television is still stealing market share from other traditional media like newspapers, magazines and radio. We believe the outcome is neutral or slightly positive for TV’s market share in the next few years. In 2016, we expect it to have a 36 percent share.

Television’s fundamentals are healthy: all-time high, stable levels of viewing; growing capacity to measure and monetize time-shifted viewing; high production quality in most genres; well-established impact on brand building; well-established tools that prove the ROI of TV ads for consumer goods. That compares with a print sector that is losing readers and advertisers year-after-year. Categories that have been loyal to print for many years — for example, retail — do switch to digital and TV.

New planning tools from Nielsen or ComScore are allowing advertisers to buy online video with the same familiar concepts and reporting currencies, so multi-platform, multi-device TV distribution will increase. But TV broadcasters do control premium content and will continue to capture most of the ad revenues generated on those platforms — for instance, by bundling live broadcast and other audiences in their commercial offering.