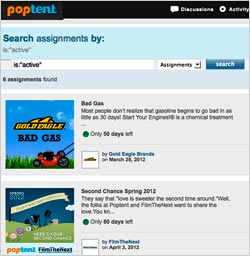 In the last few years, Poptent has emerged as one of the main players in the niche for crowdsourced video advertising.

The company matches its network of 50,000 independent videographers and filmmakers globally with assignments primarily for online video- -- but also traditional TV. They include spots from brands from American Express to Crest to FedEx.

Each assignment posted to the Poptent site draws from 35 to 100 submissions, from which participating marketers choose one or more of the video ads produced on spec.

Advertisers typically pay $7,500 to $10,000 per winning spot, and Poptent to date has awarded a total of about $4.6 million in cash payments to contributors for completed projects.

Now the company is building on that model by launching its own video production unit that taps its most talented producers to create ads and Web marketing videos for clients in-house.

The move follows a six-month testing phase during which Poptent Productions has created spots for advertisers including Dell, Intel, Jaguar and General Mills.

Poptent President Neil Perry said the step was prompted by marketers seeking to leverage the company’s video ad resources, but on a private basis. “A lot of brands are interested in sending assignments, but don’t want them to be shown on our public Web site” for competitive reasons, he said. Now they have that option, while still being able to create ads for only a fraction of production costs for a traditional TV commercial.

Among the more high-profile ads created during the test phase was a 30-second spot for the Dell XPS laptop that ran during TV broadcasts of college football's BCS national championship game and was in regular rotation on ESPN SportsCenter.

A separate crowdsourced Poptent-created ad for Dannon’s Oikos Greet Yogurt brand even made it to the Super Bowl. The humorous spot starring actor John Stamos was the first yogurt commercial to run during the big game. For the most part, however, Poptent ads won’t have as grand a showcase, running as online-only pre-rolls or within display units.

Perry points out the company is also handling an increasing amount of custom video work for brand Web sites or their pages on social properties like Facebook and YouTube. “There are so many places to put video now, companies don’t have enough of it,” he said. Poptent is counting on that demand to fuel the growth of its new production unit, which Perry predicts will eventually rival its crowdsourced video business. The privately held company does not disclose revenue or other financial figures.