How Much Energy Does The Internet Use? 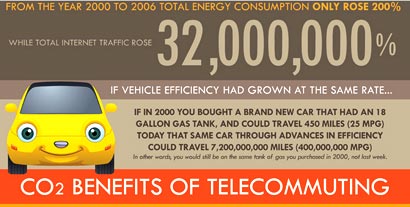 Google produces more than a quarter of a million kilograms of CO2 annually to power searches -- enough to run a freezer for 5,400 years. That's according to WordStream, which put together an infograph to tell us how much technology pollutes the planet.

How much does the energy it takes to run the Internet affect the world we live in? Did you know that one spam message produces the equivalent of 0.3 grams of CO2? And what about the 62 trillion emails sent each year? Those emails produce as much CO2 as 1.6 million cars driving around the earth.

WordStream also gives us the benefits of the Internet. Telecommuting allows many people to work from home. In fact, 40% of the U.S. workforce could technically work from home. Even with technological advances making this possible, only 2.5% of U.S. workers telecommute. If the 40% of workers who could telecommute would do this two days a week, it would reduce yearly carbon emissions by 53 million metric tons.

Google recites a slightly different story. On the Google Green Web site, the company tells us that 100 searches compare with using a 30W laptop for one hour, turning on a 60W light for 28 minutes, or drinking 1.5 tablespoons of orange juice. Specifically, the company uses about 0.0003 kWh of energy to answer the average search query.This translates into roughly 0.2g of carbon dioxide.

Google claims that to provide its products for one month, the company's data servers use less energy per user than leaving a light on for 3 hours. Google wants to power the entire company using renewable energy and uses about 30% to power operations today. Investments exceed $915 million.

Similar to search, Google calculated the carbon dioxide emissions for everyday activities and compared them to YouTube and Gmail. Streaming 1 minute of YouTube requires 0.0002 kWh, and generates approximately 0.1 g carbon dioxide. Google uses 2.2 kWh per Gmail user every year, and generates 1.2 kg of carbon dioxide, according to Google.

Now environmentalist are voicing concerns about the infrastructure supporting cloud computing. We will likely see a stronger push for a greener Google, Facebook, Microsoft, Yahoo and others that rely on servers to power information access on the Internet.

What did you do for Earth Day on Sunday, April 22 to save the planet?

environment, google, green eco-friendly, search
1 comment about "How Much Energy Does The Internet Use?".
Check to receive email when comments are posted.
Next story loading