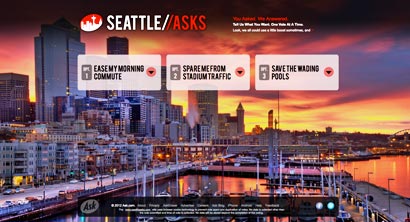 Ask.com has launched a branding campaign -- You Asked, We Answered -- polling residents in and around Seattle. It gives them an opportunity to voice complaints, such as lousy morning commutes, loss of recreation activities due to budget cuts and gloomy weather. Ask will "answer back" -- in an effort to ease one of the city's biggest annoyances.

The Q&A site ditched the concept of mass marketing in favor of a targeted, local strategy that speaks to audiences on key issues. The campaign, almost reminiscent of something Google might do, could trend through the end of the year as Ask makes its way from city to city, depending on the Seattle success.

"We wanted to piggyback on some paid media efforts, such as television campaigns and other local ads," said Valerie Combs, Ask's vice president of communications, who is driving the project. "We wanted to give back to the community, while reminding people of the brand, rather than the campaign being 100% stunt-driven."

Combs said Ask began running local television ads in a couple of strategic markets, such as Seattle, back in September 2011, to test the waters of integrating traditional media with online and mobile. As part of the project, the Q&A site worked to understand the needs of the community and support local efforts.

The campaign took on three projects -- Ease My Morning Commute, Spare Me From Stadium Traffic and Save The Wading Pools -- and asked locals to vote on one through May 15 on either the dedicated Web site or the "man on the street," known as Answer Man and Question Mark Boy, two superheroes making their way through the city.

Those who want to vote also can download Ask's PollRoll mobile app launched during South by Southwest. Geographic targeting features identify the location of the mobile device downloading and launching the app. The survey pops up as the first poll for area residents.

The percentage of mobile traffic continues to grow on the site. Today, traffic runs at about 12% on Ask.com coming from the mobile Web and dedicated app. California, Texas, Florida, New York and Illinois have the highest percentage of traffic on mobile on the Q&A engine.

Aside from the online and mobile branding campaign, Ask had banners hung on freeway overpasses that read "Morning Commutes Suck" to attract commuters to vote. The company also recently began using a social experiment to foster innovation, giving employees time to work on pet projects, before exploring the possibility of turning them into services. Google began supporting that strategy years ago with its 80/20 project.