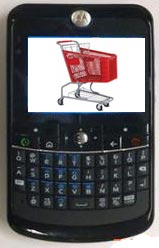 According to a new research report from GfK, half of smartphone and tablet owners use their devices for price comparisons while shopping. The mobilized consumer has become a new, highly informed and empowered shopping force in the retail arena, and people are using their mobile tools to achieve a sense of control over the purchase process. The most mobilized of shoppers are leveraging their device at every key stage of the purchase process, from research to peer recommendations, value-seeking to the purchase itself.

Not only are half of advanced device owners using them for shopping now, but 44% are looking for coupon opportunities on the devices and 17% have already purchased a product via mobile platforms. Clearly, this m-shopper class is also fully engaged in social networks as part of the process, since a third of smartphone or tablet owners have “liked” a retail brand on Facebook.

According to GfK, this new process of “extreme shopping” is being driven by a greater sense of control. Owners of smartphones and tablets say they feel “more in control than ever before” of the shopping experience, because these devices help them choose the best products, shop more efficiently and find a broader range of information sources.

The often-discussed but rarely quantified phenomenon of mobile “showrooming” is quite real, the GfK research shows. About a quarter of respondents said they have scoped out products in physical retail venues only to make their purchase of them online and via their smartphone.

GfK says the mobilized “extreme shopper” is not only affecting the bigger-ticket items that seem to require deeper research. “Our research shows that the mobile trend is substantially impacing food and beverage, health and beauty, and even lawn and garden,” says Rob Barrish, SVP Digital Technology, GfK, who presented the research this week at The Market Research Technology Event in Las Vegas.

Younger mobile users are the driving force toward Extreme Shopping. GfK finds that among 18- to-34-year-olds, 34% report using a smartphone or tablet to engage shopping, compared to only 10% of the 50-to-65 segment.

GfK analysts argue that the challenge to retailers can be embraced as an opportunity to deepen relationships. Brands need to facilitate the learning process and help consumers achieve greater efficiencies and sense of new empowerment in the marketplace that “extreme shoppers” appear to enjoy. GfK argues that the segment of people who are “extreme shoppers” today will be the typical consumer in coming years.

The GfK research was based on 1,088 interviews in mid-March of this year.