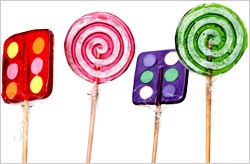 Just as it’s rolling out its first phase of The Shops at Target, the retailer has unveiled the lineup up for its next round of specialty stores-within-its-stores: This fall, it will introduce four boutiques -- New York’s Kirna Zabete and Odin, San Francisco’s The Curiosity Shoppe and Boston’s PATCH NYC -- for a limited engagement at all its stores.

Currently, Target shoppers are browsing the store’s inaugural specialty shops, which rolled out last week. Those include The Candy Store, Cos Bar, Polka Dog Bakery, Privet House and The Webster.

In each case, the Minneapolis-based retailer works with the shop owners to “co-create” exclusive apparel, home collections or treats, and is part of the company’s efforts to remind shoppers that it’s not just a discounter, but a chic and quirky one, as well.

“There are fewer and fewer places that have this treasure hunt mentality, where shoppers can browse through the unexpected and still stay within budget,” says Katie Geraty, VP/director of insights and strategy for the Integer Group, tells Marketing Daily. “Like Costco, Target is masterful at sourcing new merchandise and finding new relationships and that creates a sense of urgency.”

Geraty, based in the market researcher’s Des Moines, Iowa, office, says there is an additional benefit in introducing customers to these small boutique owners, in that it creates social goodwill through the perception of supporting small businesses.

The fall installment of The Shops at Target will include more than 230 exclusive products, ranging from novelty pieces and pillows from San Francisco’s The Curiosity Shoppe, chic leather jackets from Kirna Zabete, knits and bags from Odin, and vintage inspired scarves and jewelry from Boston’s PATCH NYC.

Like Target’s limited-edition design partnerships, such as the recent Missoni collection that generated so much interest it crashed Target’s site, Geraty says the relationships work to bring traffic into the store. “And you don’t know what you’ll find at the Candy Store, for example. It almost puts the shopper in the mindset of a vacation or travel, because you get to come home with this little souvenir.”

It’s another example, she says, of retailers learning that the store has to become more than just a place to buy something -- especially when consumers can get virtually everything Target sells somewhere else, “even Amazon,” she says. “It’s not unlike Groupon, or other carefully curated digital strategies. It’s something special, with a limited time frame, and that can be exciting.”

retail, strategy
1 comment about "Target's Little Shop Of Surprises ".
Check to receive email when comments are posted.
Next story loading