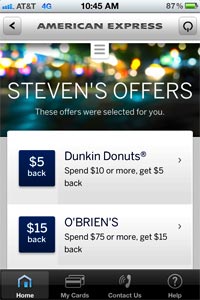 American Express made news last year when it partnered with Foursquare to synchronize deals with check-ins. Once an Amex cardholder synced their card with Amex, a Foursquare check-in at select locations would load the discount or cash back onto your credit card so it would be activated when your card was swiped at the merchant location.

In an update of its iPhone app yesterday, Amex introduced a new “My Offers” program that takes more of the daily deal format into its own house by curating and activating deals according to a customer’s own buying patterns.

The My Offers program is a pilot being offered only in New York City and Los Angeles, while national retailers Dunkin' Donuts and Baskin Robbins are available nationwide.

When I opened my Amex app at midtown, the apps alerted me that there were five offers ready for me in my immediate vicinity. In fact, there was a massive scroll of deals in that section of the app. If I was in a mood for $10 worth of Dunkin' Donuts I could get a discount. But it also featured deals from a wide range of eateries and apparel shops.

The convenience factor is admittedly compelling. Instead of mussing and fussing with coupons or clueless shopkeepers who never heard of your daily deal, this model just loads the offer onto your card. Whether it is a discount or cash back, the process is automated and cuts the clerk out of the loop entirely.

Now, who really needs another stream of daily deals on their smartphone? Amex is getting into the deals distribution business obviously as a service to its merchants and as a way to bolt you to using the credit card for purchases that, frankly, I likely would have made with my VISA debit card.

In addition to convenience, Amex contends that it is also helping to triage the many deals flowing onto your smartphone by targeting just the right deals based on your “spend graph.” Your own spending history and your location will determine the offers you see.

I can’t tell myself whether this is true. Honestly, it looks like a massive scroll of higher-end offerings nearby, with many sporting designer or local franchise names I barely recognize. And I am not a high-end guy. Without some transparency about how this “spend graph” is determined, I as the consumer can’t really tell whether I am being targeted smartly or just being pitched under the guise of personalization.

Regardless, this is another reminder of the power position that credit card companies are in when it comes to the m-commerce evolution. They are the brands with whom we have the most vested trust, and they are in a very strong position to remove the friction of digital couponing and dealing. Also important is the issue of who you trust to personalize experiences with your own usage and payment histories. Not only do the payment vendors have some of the most valuable data layer about you, including your purchase history across categories, but they also most likely have our trust in using it.

This should also be a reminder to a number of third parties like the daily deals vendors and the LBS providers who are trying to get a piece of the local discount pie that all of these credit card companies have the deepest and most direct relationship with the consumer. They can cut out a lot of the middle tiers that the mobile startup industry has produced.

credit cards, mobile, retail
1 comment about "American Express Has A Deal Just For Me in Behaviorally Targeted App ".
Check to receive email when comments are posted.
Next story loading