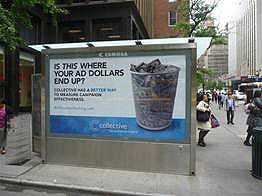 Digital audience targeting company Collective began running ads this week on New York City trash trucks and on bus shelters, telephone kiosks, and newsstands close to ad agencies with campaign messages like "Is This Where Your Ad Dollars End Up."

This week a garbage truck featuring posters of Collective's ad will circle the streets, picking up trash where agencies are located.  As the truck circles the area, Collective will run a contest called Tweet The Truck, asking people to capture and tweet their best truck photo and caption for a chance to win a $1,000 gift card. Collective Cares will match the winning prize with a $1,000 donation to City Harvest.

The "Tweet the Truck" contest began Monday -- the first stop at Ogilvy. A Web site that asks are your ads working provides instructions on the campaign, such as instructions on how to submit an entry, and details on eligibility to participate.

The goal is to educate agency executives on measuring effectiveness through causal attribution. While the campaign features place-based media, rolling garbage truck, social media and direct mail pieces, it misses out on search engine marketing, such as paid-search ads that might directly address the agencies or executives at those agencies.

Causal attribution analyzes impressions -- how did one event influence another and what did it cost? This measurement tool provides a better view of return on investments, rather than arbitrary metrics such as click-through rates or last clicks. A viewable ad impression standard and tool similar to the one rolled out by DoubleVerify on Tuesday will help to support this model.