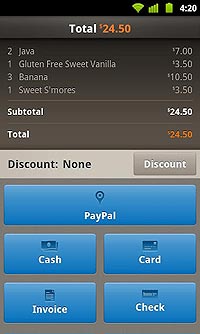 As Google fumbles to find its Wallet and the ISIS consortium has tests coming any day now…no, really, eBay’s PayPal is making a wide range of moves aimed at filling the M-Payments gap. Statistics are all over the map about how many people have used their mobile devices to pay for things.

While some share of mobile users are becoming more comfortable hitting a "buy" button on their phones, the instances of someone using their phone as a credit-card-like payment system are still pretty rare in the U.S. But given the accelerated pace of mobile adoption and comfort levels, my guess is that people will be ready for m-payments before the device infrastructure and business models around NFC payments are in place.

That is where PayPal hopes to come in. The long-standing online payments company continued an aggressive push into physical retail this week when it announced partnerships with 15 major retailers. National outlets like Abercrombie & Fitch, Barnes & Noble, Office Depot, Toys ‘r Us and JCPenney join Home Depot and others that will allow for users to make a payment from a PayPal account from their mobile phone in-store. In a blog post yesterday, President David Marcus was unambiguous in aiming this effort directly at the rival payment plans.

“With PayPal, retailers don’t need to rip and replace, install NFC or conduct a massive upgrade to bring innovation to their customers. PayPal works seamlessly with a retailer’s existing point-of-sale hardware. This simple integration allows consumers to pay quickly, easily and securely.”

In the Home Depot model, users enter their cell phone number and PayPal pin at POS and get an SMS confirming the payment and clicking through to a receipt. Technically, the model doesn’t even require a cell phone, but much of the account management, authentication and receipting is being handled with a device. Of course, PayPal also has some NFC models in play, and if the company wants to get the necessary added value from offline payments, it needs to include mobile platforms.

After all, PayPal integration at POS is just another standard payment option that is not much better than a card swipe. It is in the integration of payments with device-based loyalty, account management, couponing, etc. that the consumer will see a difference.

At an eBay meeting yesterday, PayPal also announced deals with VeriFone and Equinox point-of-sale terminal makers to integrate PayPal into their systems. Marcus claims that the deal will give PayPal access to almost 40 million POS terminals.

While the endemic credit card companies have a natural advantage in the m-payment ecosystem, the West is still quite wild and wide open in the space. I spoke with investment analyst Linda Gridley earlier this month about the m-payments picture after she published a far-ranging report called “POS Goes Digital.” Gridley feels that recent legislation that caps debit card fees and forces the ecosystem to open up more will make this payment system less attractive to banks. She believes both banks and retailers will be incentivized to embrace seamless and lower-cost payment models, especially mobile.

There are a lot of moving parts to make mobile payments work, but there are also a lot of endemic industries like coupons and loyalty program providers that could end up being compressed by so many operations occurring on a phone. Among the likely winners she put PayPal up there with Google. “I think eBay [PayPal] are the guys closest to putting it together,” she says. “They don’t have all the entities in place, but I think they have done a really good job around who has the right mobile vision.”

Just look at their acquisition list: RedLaser, Milo [in-store product inventory], Where, and PayPal itself bought FigCard, which enables mobile payments at POS registers with a USB device. They are here to play for pay.