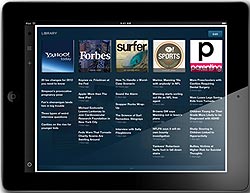 Only seven months after its launch on the iPad, Yahoo’s news aggregation app Livestand is being folded. The company announced at its most recent earnings call that a number of projects were being curtailed, and at the company blog late last week Yahoo confirmed that the elaborately designed tablet app would be shelved. The long-winded spin on the decisions claimed:

“Platform consolidation enables us to put many Yahoo! properties onto common key platforms and technologies to make everything more scalable and nimble. And when we discontinue products, it will be so that we can focus on opportunities where we lead and where we can create the most meaningful experiences for people using our products, and for our partners, developers and advertisers.”

Citing its recently released Axis mobile browser, Yahoo says that it is “pivoting to a mobile-products-first development model,” although it is not clear what was not “mobile-products-first” about a tablet news aggregations app. The focus will be on HTML5 properties, the statement suggests.

Livestand was launched promising a more personalized experience for consumers that also featured some of Yahoo’s major media partners, especially leading magazine providers. It clearly took aim at tablet phenomenon Flipboard and its success with shaping newsfeeds into attractive tablet experiences and CNN-owned Zite’s advanced personalization engine. The app competed against other aggregators like Pulse and AOL’s Editions. Despite a positive 4-star rating among its users, the app sites today is only the 94th-most-popular iPad app in the News category, right behind AOL’s Editions (#89). Meanwhile, Flipboard remains the fifth-most-popular app in the category, with Pulse at #13.