Meeker Promises There Is Money In Mobile 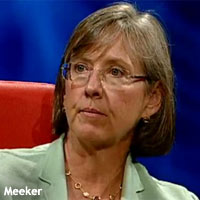 Facebook's initial public offering cast a harsh light on its failure so far to monetize its immense mobile audience of 500 million worldwide. But it’s hardly the only company struggling to figure out how to make money off a rapidly growing mobile user base as more people adopt smartphones and tablets.

In her annual Internet trends report presented Wednesday at the AllThingsD D10 conference, Mary Meeker underscored the upside for mobile monetization based on the history of ad growth on the desktop Web.

Indeed, the Kleiner Perkins Caufield & Byers partner argues mobile is more promising than the mid-'90s era Internet in terms of rapid user growth, a large number of innovative developers and a broad base of sophisticated advertisers and marketers.

With her trademark series of data-filled slides, Meeker also points to factoids showing that mobile monetization has grown from 153% annually from $700 million in 2008 to $12 billion last year. The bulk of that revenue (71%) has come from app sales and only 29% from mobile advertising.

As with the desktop Internet, the report emphasizes that “dollars will follow eyeballs.”

Mobile traffic makes up 10% of all Internet traffic, with ample room for further growth. At the same time, mobile is commanding 10% of users’ media time but only 1% of U.S. ad spend last year. It took time, but online ad spending -- equal to 22% of overall ad dollars -- has come more in line with the Internet’s share of time spent of 29%.

Meeker suggests that the same rough balance between time and ad dollars spent will eventually come to mobile as well. Less encouraging: eCPMs on the desktop are still five times higher on average ($3.50 versus 75 cents) than those in mobile because of the lower value assigned to mobile advertising.

As companies’ business models lag consumers’ shift from the PC to mobile, average revenue per user (ARPU) is 1.7 to 5 times lower on mobile than the traditional Web. Examples include Internet radio service Pandora, with a mobile ARPU of $3.87 compared to $6.62 online, and Zynga, where the difference was much more pronounced at $5 versus $25.

Despite increasing its mobile audience by more than 50% in the last year, Facebook’s ad ARPU has remained stuck at about $4. The social network acknowledged that user growth has outpaced the increase in ads on the site because of its lack of significant mobile advertising to date. In addition to its $1 billion purchase of Instagram, the company is rumored to be considering acquiring the Opera mobile Web browser to help build its mobile business.

Still, Meeker projects that mobile monetization levels in the U.S. could surpass the desktop Web in one to three years. That seems a bit aggressive considering that the Interactive Advertising Bureau estimated mobile advertising last year at $1.6 billion, compared to $31.7 billion in overall online ad revenue.

To back up her optimistic outlook, Meeker points to the Japanese market, where companies like Gree and CyberAgent have seen mobile revenue ramp up quickly in recent years. The former, for instance, has seen its mobile ARPU quadruple from $6 in the third quarter of 2009 to $24 in the first quarter of 2012.