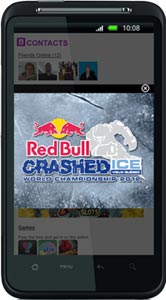 So many billions and billions of social mobile page views, so little monetization. This didn’t start with Facebook and its notoriously underdeveloped device strategy. Massive inventory and low ad response has been the lament of social mobile media for a number of years. One of the earliest white-label online community providers to the carriers in the pre-smartphone era, airG, encountered this problem and turned more toward virtual currency models for monetization. “We started getting into the mobile advertising space when it was too early,” says VP Corporate Development, Dejan Mirkovic. “But now we have gotten back into it. We can see that brands can benefit from the targeting data and if we make sure we deliver targeted ads.”

Even more to the point is the format itself. “What we have learned is that banners don’t work,” he says. “In social media the only thing that works is a targeted ad that is relevant and a disruption method like an interstitial.” They learned and implemented that lesson in a recent Red Bull Canada mobile campaign aimed at driving users to register for the annual Red Bull Crashed Iced World Championship event. Within 48 hours of starting the campaign with a standard banner, they pivoted to a full-screen interstitial. The effort employed a new set of 14 more precise targeting parameters that airG is rolling out. In this case aiming for extreme sports enthusiasts, the ads were targeting males 18 to 34 with interests in skating, hockey and related activities with other layers for gender, age and location.

According to Omar Kaywan, director, mobile advertising, airG, one of the biggest learnings from working with Red Bull and its agency on the campaign was the importance of discrete mobile executions. ”Look at what is really effective [on mobile] rather than just taking what was on the Web and optimizing it for mobile. We had a smaller banner that wasn’t as successful. So we ran it through as a 300x200 interstitial that had frames and was more visual.” The resulting 8 million mobile impressions helped drive enough traffic so that 10% of event registrants came from mobile.

For Mirkovic it is clear that a combination of targeting and getting in the user’s face, even for a moment, is critical. “If you are going to show a banner, you will get bad performance without targeting. If you show an interstitial with targeting you will get better click-through.”

For airG, which is a virtual space where people discover new people and engage in online activities like mobile games, the nature of the experience is different from the more utilitarian Facebook. While Facebook is a network of existing friends communicating a wide range of personal messages, “[airG] is more entertainment-oriented,” he says.

The company has over 6.5 million active users generating billions of impressions a month. “This is a service where people can accept disruptions because of the value proposition,” he adds. In a recent survey of 30,000 of its users, airG found that 26% have already engaged with a rich media or video ad unit. More than 70% of those who viewed a video ad spent up to 30 seconds with it. “To get good click-through rates you have to look at interstitials and disrupt the service slightly,” says Mirkovic. “It may make some customers angry, but you need a model that works.”