Ford Warriors Are 'Models of Courage' 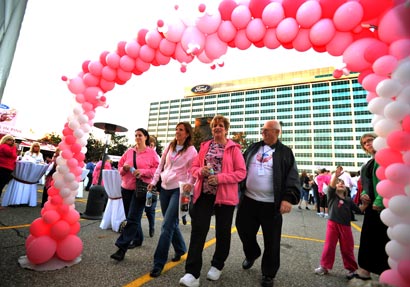 Ford's goodwill program to raise awareness about and fund research and treatment programs for breast cancer is launching a larger campaign this year that spotlights 11 survivors. The effort, which the Dearborn, Mich., automaker has run for 18 years, raises funds through sales of a distinct line of branded apparel, accessories, gear, and even a set of drums (drumming circles have become popular among survivors for spiritual and salutary benefits).

The 11 cancer survivors, "Models of Courage," will appear in videos, ads, events and other national and local market activities. For the first time, men are among the models, reflecting the growing incidence of the disease among males. The survivors will model the 2012 "Warriors in Pink" line - which now includes menswear. Ford is selling the goods at FordCares.com, and at Susan G. Komen for the Cure races. All the proceeds support the cause.

In the past, Ford partnered exclusively with Susan G. Komen for the Cure, and all proceeds went to it. Things are different this year in that regard, as well. Tracy Magee, Ford's primary brand experiential manager, says Ford Warriors in Pink now involves three other organizations -- The Pink Fund, Young Survivors Coalition, and Dr. Susan Love Research Foundation.

Without touching on events in the Komen organization's recent past, Magee tells Marketing Daily the choice to add other charities was really about people wanting more donation options for the money they spend on Ford Warriors in Pink products, and that Ford chose an array of other charities to spotlight groups that take on breast cancer from different angles. "There are other organizations who approach the disease differently, with different missions. They are complementary, so [donors] they can choose where their dollars are going." She says that last year Warriors in Pink raised about a million dollars.

The campaign also includes a promotion with the chance to win a "Warriors in Pink" Ford Escape. "Each year we try to look at what more we can do," says Magee, adding that Ford and its AOR Team Detroit are rolling out a print and broadcast campaign this fall, to complement the digital efforts that are live now. "We are also including elements on Facebook, including new videos and warrior profiles," says Magee. She adds that Ford also has a "Warriors in PInk" modified Transit Connect vehicle laden with apparel that it is taking to events like Houston Art Car, and the Essence Music Festival, of which Ford is a sponsor.

The campaign, which had used the universal pink ribbon symbol, now uses an array of icons called "Symbols of the Warrior" that are kind of like soldiers' campaign ribbons but celebrate the patient's path through treatment. These were originally created in 2006 by Linda Meek, senior VP at Team Detroit and Lauren Crane, creative director at the agency. The symbols are central in the creative around the program, and are key visual elements in the products, as well.