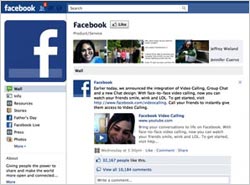 Real-time bidding (RTB) aims to fight the blindness and non-click stigma associated with Facebook ads. Marketers may have seen the last of weight-loss ads served to skinny people, dating sites for those married or other frustrating ads that prevent visitors from coming back to the social network, and cost brands time and money.

The challenge has been to get people to click on ads. At the April MediaPost Search Insider Summit, college students from Florida Gulf Coast University said they never click on Facebook ads. Some believe that ads carry computer viruses. Those who have clicked on a Facebook ad admit to doing so by mistake.

How does RTB work? Real-time bidding provides impression-level decisions on ads per person and interaction.

Demand-side platform (DSP) technology from MediaMath, DataXu, Turn and others access available ad inventory, refining campaign optimization models and making decisions on bids for specific ads as site visitors click and browse within the Facebook network and across the Internet.

The bids are determined by supply, demand and data collected in cookies dropped in browsers like Chrome, Internet Explorer or Firefox. As the person leaves Facebook and traverses the Internet, each click supports the ad-targeting platform when the Facebook member returns to the social network.

"Welcome to the age of multichannel mainstream targeting," said Marty Weintraub, founder of digital marketing firm aimClear, and author of "Killer Facebook Ads." He believes the social network may introduce regargeting as part of its ad-serving technology.

Google already offers it. aimClear drives users to a landing page from a Facebook ad on a specific demographic segment that sets a Google retargeting cookie and follows the consumer with both Facebook and DoubleClick cookies. "Targeting is no longer the problem," Weintraub said. "What marketers say to users is the problem."

Dialing in precise interest on Facebook will come, along with something similar to "Ads By Google," ad impressions on partner sites other than google.com.

Julie Ginches, DataXu VP of marketing, cites IDC numbers that put the RTB market at $5 billion by 2015 -- up from 2 billion this year. She said it's too early to predict where ad prices on Facebook will rise. It all boils down to supply, demand and quality.

Industry insiders have two schools of thought on whether we will see rising prices for display ads based on RTB practices. Some believes prices won't rise. Others believe marketers will get what they pay for. Better targeting and more competition generally drives up prices. If local merchants both seek the same consumer audience, it makes sense that it will drive up prices, according to a source. He said the RTB market continues to grow by about $1 billion annually.

Forrester Analyst Nate Elliott writes: "somehow Facebook still hasn’t stumbled upon a model that has proven consistently successful for marketers, or that brings in the massive revenues to match the site’s massive user base. (The company made less than $4 in ad revenue per active user in 2011.) "

RTB can complicate media buying. In general, eMarketer Analyst David Hallerman views RTB both as a solution and a problem because it's more complex. Not everyone buying ads is into technology, and not all media buyers are tech-savvy. Having the data and the ability to sell ads more quickly becomes important for Facebook. And those willing to try a new technique for buying media better know how to measure it, he says.