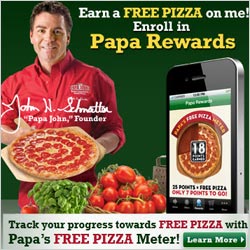 Papa John’s’ score of 83 (up 5.1% versus last year) was the highest-ever by a brand within the limited-service category -- and it tied the score of 2012’s #1 full-service restaurant chain, Red Lobster. (ACSI’s full-service chain rankings were also just released.)

In fact, QSR chains’ overall satisfaction score rose 1.3%, to 80, even as full-service chains’ overall score declined 2.4% -- putting them also at 80. This is the first time the two types of chains have had the same average score.

“This bodes well for fast food and should be a warning signal for full service,” observes analytics-driven customer feedback supplier CFI Group, whose platform employs the ACSI data. “The quality of the fast-food experience is improving, according to diners. Add to that the industry’s ability to price low in a weak economy, and it seems a safe bet that fast food will make further inroads into the traditional restaurant business.”

Among QSR chains, Subway (covered by ACSI for the first time this year) and Little Caesar (+2.5%) follow Papa John’s, with 82 scores.

Pizza Hut’s score declined by 3.7%, but it’s still in the top five, and still beating all of the burger chains, notes CFI.

Dunkin’, also being tracked for the first time, is three points ahead of Starbucks, which saw its score drop by 5%. (The satisfaction of Starbucks’ loyal fans is being dampened by rising prices, according to CFI.)

Wendy’s (+1.3%) is clearly outperforming Burger King (unchanged) and McDonald’s. But thanks to its expanded menu, remodeled stores and quality coffee, McDonald’s’ score is up 1.4% and at an all-time high (it was at 59 as of 2000, one of the lowest scores across all categories tracked by ACSI).

To justify their higher costs with ever-more-selective and frugal consumers, full-service restaurants have to distinguish themselves from one another, as well as from the much-improved QSR experience, points out CFI.

Applebee’s debuts on the ACSI this year with a score of 77. Chili’s Grill & Bar, which has been at the bottom of the pack for several years, saw its score drop by 3.8% this year, to 76.