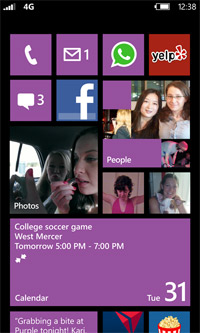 With the unveiling of its upgraded mobile operating system Wednesday, Microsoft signaled its entry into the increasingly crowded mobile wallet space. The company’s new Windows Phone 8 software rolling out this fall will include a digital wallet feature for storing debit and credit cards, coupons, boarding passes and the like.

The move comes on the heels of Apple announcing its own wallet app, dubbed Passbook, as part of the latest version of its iOS software for the iPhone and iPad. But Passbook, which also acts as a repository for various cards and coupons, does not rely on NFC technology, which allows “tap to pay” transactions.

Microsoft also joins other companies trying to lead the mobile wallet race including Google, PayPal and Isis -- the joint venture of Verizon Wireless, AT&T and T-Mobile USA, which plans to launch an NFC-capable network this summer. Microsoft said it plans to have a version of its wall that’s compatible with Isis by next year.

Joe Belfiore, Microsoft’s vice president for Windows Phone, said at the company’s presentation that its Wallet Hub would differ from Google Wallet in that the “secure element” for payments would be located in a SIM card rather than in a phone’s hardware. (The idea is that security is transferred more easily from one device to another.) French wireless carrier Orange will be the first to support Microsoft’s wallet app.

Among other new features in Windows Phone 8, the NFC technology will also allow users to tap two phones together to share things like photos or business cards or even play board games. The upgraded platform will also support larger, higher-resolution screens and a version of Internet Explorer 10, similar to that launching in Windows 8 on the desktop and Microsoft’s forthcoming Surface tablet.

Whether the Windows Phone updates will be enough to attract consumers in large numbers is the big question. The much-hyped launch of the platform, replacing Windows Mobile in late 2010 failed to reestablish Microsoft as a legitimate contender to Google and Apple in the smartphone arena. Windows Phone claimed just 4% share of the U.S. smartphone OS market in April, down from 4.4% in January, according to the latest mobile data from comScore.

An IDC forecast earlier this month, however, predicts that the strategic alliance between Microsoft and Nokia will eventually help both get back in the smartphone game, with Windows Phone becoming the No. 2 smartphone platform behind Android by 2015. The research firm predicts the Microsoft phone software will capture almost 21% market share worldwide in three years.