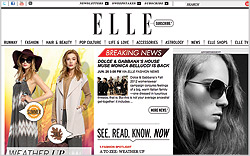 As the online ad market looks more like the Nasdaq, publishers must decide whether to build their own ad exchanges.

Just the latest to take the plunge, Hearst Magazines this week debuted a private exchange, which it put together with the help of Pubmatic. Hearst Digital Media currently represents a portfolio of more than 25 digital brands, including Cosmopolitan, Esquire, Seventeen and Good Housekeeping.

According to Kristine Welker, chief revenue officer of Hearst Digital Media, the decision to go private was all about quality control and exclusivity.

“The private exchange will [let us] deliver on the growing complexities around digital media buying within the protected environment of our quality brands and premium content,” said Welker.

With the inclusion of the DMP, Hearst is hoping that its exchange can lure more media buyers with the promise of added value. Hoping to reduce their reliance on third-party ad exchanges -- which have been criticized for driving down CPMs -- publishers have had to take matters into their own hands.

Late last year, Hearst rival Condé Nast debuted its own private ad exchange -- after testing it with a select group of advertisers, including eBay and Macy’s, with the help of Admeld, which Google bought last year for $400 million.

Last July, NBC Universal also tapped Admeld to launch its own ad exchange. As the time, NBC said the exchange would give clients direct access to premium display ad inventory, which could be targeted at scale across the NBC Universal Audience Platform, NBC's own digital ad network.

Still, the amount of online ad dollars being channeled through RTB systems remains small relative to total ad spending. Last year, the total was expected to reach $1.1 billion -- then double to $2 billion, this year -- according to IDC analyst Karsten Weide.

To better compete against other “supply-side” ad platforms, PubMatic just recently raised a $45 million round led by August Capital.