PSP Vita: Dead In The Water, Alive In My Hands 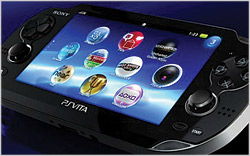 Sony has the advantage of deep pockets and patience. For all of its legendary missteps (Watchman, BetaMax) it also produced some longer-term game changers (Walkman, PlayStation). And lest we forget, before Apple became the hardware brand identified as the oracle of design, “Sony Style” was a deserved brand moniker.

The company tends to overdo while Apple tends to covet simplicity. When the overweight, overpriced PS3 landed on my doorstep several years ago sporting a then-rare Blu-ray disc player, Sony seemed to be aiming for the fences.

Although the super-powered CPUs at the core of the PS3 proved to be less critical to its success than the company may have planned, the inclusion of BD did help Sony win a high-def disc war. BetaMax had been vindicated, or at least until digital downloading obsoletes BD. Oops.

The dedicated handheld game console Playstation Vita, like the PSP before it, seems like another piece of untimely excess. At just the point when smartphones are replacing handheld game devices, Sony comes to market with an outrageously overpowered and overpriced model ($250 for WiFi, $300 for 3G iterations).

I have been playing with the Vita now for a couple of months, and it is clearly designed to mimic aspects of app-based mobile gaming and also put as much distance as possible between itself and iOS devices. With multiple input modes (joystick, directional, buttons and front and back touchscreen control) the idea here is to carve a high-end niche that is unmistakable for “mobile gaming.” And to be sure, the Vita ports I have played -- like Uncharted and Rayman Origins -- are just stunning, and boast control schemes that probably are not possible on pure touchscreens. By the way, it also sports a hi-res OLED display that to my eye matches the iOS Retina Displays in sharpness and color saturation and exceed both in uniformity and quality control.

Too little too late, I am sure. I can’t imagine the market supporting another generation of dedicated handheld gaming. My guess is that sensing this, Sony swung for the fences with the Vita and delivered hardware that can endure long enough to gain a respectable market of hardcore gamers. That is what worked with the also overwrought PSP.

What Sony has not learned from Apple or even Microsoft is the rich possibility of the connected app market. The on-deck PlayStation Store is still, after all of these years, sad. The marketplace interface surfaces just a few titles at a time and makes no effort to personalize the experience. Sony’s preoccupation with its own film and TV properties seems to limit the opportunities for marketing partners. It never embraced the possibilities of the low-priced gaming app, despite a ghetto of under-promoted “Minis.”

Research in Motion will be the company that business students study for decades as a case study in missed opportunities. But Sony’s persistent failure to grasp the potential of the app ecosystem in all of its devices is itself an amazing story.

gaming, mobile
1 comment about "PSP Vita: Dead In The Water, Alive In My Hands ".
Check to receive email when comments are posted.
Next story loading