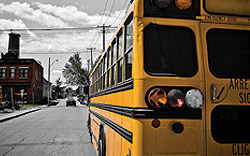 Yes, we know the yellow buses only unloaded the last of the neighborhood school kids 15 minutes ago. But that means it’s time for the economic experts to think about back-to-school shopping, and what it might signal for the industry’s mighty fourth quarter.

He says he expects consumers to be extremely cautious as they get ready to do their back-to-school shopping, especially because of a barrage of potentially downbeat headlines, including the European debt crisis. Even ads for the upcoming elections, highlighting weaknesses in the economy, may make consumers less likely to spend.

“Though consumers stateside may not fully recognize the impact, ripple effects resulting from Europe’s ongoing financial meltdown, including a pullback on bank lending and capital markets, may have an effect, especially if it creates ripples in the job market or in their own portfolios,” he says.

As a result, he’s expecting this year to echo last year’s start-then-stop pattern. “Last year, we started great guns but then lost some steam,” he recalls. “There’s a lot that can happen in July and August that may influence shoppers’ perceptions.”

During last year’s holiday season, he points out, retailers were somewhat successful pulling shoppers ahead in the calendar, and he expects them to try some of those same techniques as the summer wears on. “I think we may see some kick-off dates, for example, with heavy back-to-school promotions. I doubt we’ll see retailers staying open 24 hours at a time, as we did last Christmas, but stores will try and create some of that excitement.”

Still, he expects stores to behave as cautiously as consumers: “Retailers are sensitive to the possibility that sales could flounder in the second half.”