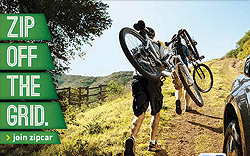 The Zipcars of the world should dispense with the warm and fuzzy messages about the environment and popularity of their services and instead talk about price availability because that's what matters to consumers, according to new research by the University of Pittsburgh.

The study was done by Cait Poynor Lamberton, Fryrear Faculty Fellow and assistant professor of business administration in Pitt’s Joseph M. Katz Graduate School of Business and College of Business Administration, with Randall L. Rose, professor of marketing in the University of South Carolina’s Moore School of Business. The study, “When Is Ours Better Than Mine? A Framework for Understanding and Altering Participation in Commercial Sharing Systems,” scheduled to be published in the July issue of the Journal of Marketing, found that consumers weight practical considerations when mulling companies that offer shared cars, cell phone minutes, and bicycles.

“We see these types of companies and services popping up all over the place,” said Lamberton. “Consumers don’t have resources to waste right now. Sharing offers a good way to save money and avoids wasting resources you don’t use. But these systems aren’t simple, and we didn’t know how consumers evaluated them.”

Lamberton said companies want to encourage consumers by marketing the popularity of sharing systems, but argues that the tactic may not work because the message consumers get is something along the lines of "take a number."

“Consumers know [that] if companies are advertising that everyone is using their services, there may not be a product available for them when they want to use it,” she said. “There is a fine line between saying something is popular and not letting consumers feel as though they are losing access. If the pool is too crowded, there may not be any room for me. And that makes the pool pretty unpleasant.”

A fictional car-sharing service was presented to an online panel of over 300 licensed drivers. They also were given usage rates and product information from a well-known company and asked whether they would sign up, and how likely they would be to use the car, and whether they were concerned the car would be available when they needed it. They also answered questions about the social acceptance and environmental benefits of sharing, and whether they had any antipathy toward the industry in question.

Lamberton said the results of the study showed that consumers who would save money were more likely to choose the car sharing service, especially since it provided access to a car in most major cities throughout the country. Then consumers considered the likely availability of cars, which turned out to be a greater contributor to sharing likelihood than almost any other factor.

In two other studies -- one involving a cell phone program that would allow users to share minutes and the other concerning a bicycle-share program -- researchers found consumers were less likely to want to share with other consumers who were like themselves because their schedules and behaviors match and they would end up competing for the product, meaning less availability.

“Marketers like to play on cohesion, and popularity of a product, but in this case that may not be the best angle,” she said. “Social factors like the environmental benefits of using shared programs don’t seem to be primary drivers for consumer use, at least at the point of decision." Marketers, she argues, need to hammer home the message that the products and services will be available when consumers want them.