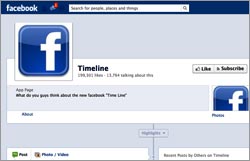 When it comes to customer satisfaction, Facebook may be an even bigger disappointment than it has been to investors.

This year’s American Customer Satisfaction Index (ACSI) E-Business Report is just out, reporting that Facebook, already the lowest-scoring e-business in its survey, fell 8% to 61 on a scale of 100. Not only is that a record low e-business score, it drops Facebook among the five lowest-scoring of all 230 companies currently ranked by the ACSI. While Facebook’s customers are unhappy with ads and have privacy concerns, what’s really drawing raspberries is its new Timeline format.

And while it is the first year the Ann Arbor, Mich.-based index measured them, Pinterest (with a score of 69), Twitter (64), and LinkedIn (63) all generated a big round of meh, as well. Satisfaction with YouTube also slipped, falling to 73. As a category, social media eased 1.4% to 69.

The overall E-Business index, compiled by customer experience analytics firm ForeSee, fell 1.6% to 74.2. (The national average for ACSI’s scores is 75.9.) “E-business websites used to be higher in customer satisfaction than most other categories covered by the ACSI, but their performance over the past three years suggests that they need to respond better to the changing needs and expectations of their customers,” says Claes Fornell, ACSI chairman, in the company’s report. “Our research shows that customer satisfaction is critical for financial performance, as long as consumers have choice and repeat business is important.”

Only 3 of 16 measured companies increased their satisfaction scores, and all are in the news and information category: FoxNews.com rose 2% to 84 in the news and information category, and has the highest ACSI score of all e-business companies -- eight points ahead of ABCNews.com, which rose 1%to 76. NYTimes.com gained slightly to 74, while HuffingtonPost.com, with 69, remains in last place in that group.

In search, Google+ scored highest, driven by customers' fondness for its traditional ad-free format, and what is seen by users as a better mobile product. And while portals and search engines fell 1.3%, that category remains on top of the e-business sector with an overall score of 79. Google ranks first with 82, Bing follows (81), then Ask.com (80). Yahoo and Microsoft’s MSN are both at 78, while AOL ranks last again, with 74.

“Google is to search what iPad is to the tablet market,” the report says. “It still dominates 65% of searches in the U.S. Bing is doing all the right things to be a player in search, but the problem is that Google users are generally satisfied and have little reason to go elsewhere.”