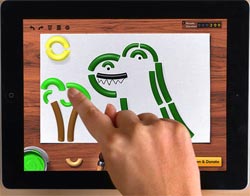 How many boxes of Kraft Mac and Cheese have been cracked open, poured onto craft tables and used for art projects rather than lunch over the past decades? It is a question Kraft wisely asks in its crafty Dinner, Not Art iPad app, designed as a solution to all those wasted dry noodles. The app lets the user design macaroni art that can be shared and even used to donate macaroni to the Feeding America Project.

For every digital mac piece glued in the app Kraft is donating 10 real pieces of pasta to the cause. “We have had 127,000 noodles donated already in the first week,” says Tom Markham, executive creative director, CP+B, which developed the app with Kraft. The iPad component plays off of a campaign that launched this week in a series of TV spots bemoaning the many boxes of the Kraft product wasted each day for the sake of art. “It was an opportunity to release the iconic power of Kraft Macaroni and Cheese and use an integrated approach,” says Noelle O’Mara, senior brand manager, Kraft.

Kraft has a longstanding reputation for developing aggressively in the app sphere. Its iFood Assistant was among the first breakout branded app successes on the iPhone, but the company has followed it with novel executions like Jell-O Jiggle It and Big Fork Little Fork. “We know consumers are engaging with apps,” says O’Mara. “It is important to the brand to be relevant to the consumers, and this is more and more of what consumers are doing. We have to figure out ways to continue building those connections and moments when they are interacting with us.”

While Kraft has met with success in many of its apps, branded downloads are always challenged to offer consumers the quality they have come to expect from the hundreds of thousands of other apps available. Even more of a hurdle is simply discovery. "They are high-risk,” admits Markham. He says that for every app that does get developed by his creative teams a hundred ideas may be rejected. “We felt we had a lot of magic ingredients lined up very neatly, and that made us confident with this app,” he says. “We knew it would be so much fun.” After building a prototype, CP+B staff found the basic mac art design was addictive and the donation element especially easy. “All you do is place a noodle into a piece of art and that results in a donation,” he says.

While the TV spot does not promote the app directly, it complements a campaign online and via a million Facebook fans that does push people to the app. Users of the Dinner, Not Art app can share their work on the social network so Kraft can share the best works and further disseminate the app. Markham says that by monitoring app usage and TV spot drops they will be able to get a rough sense of how the integrated pieces are affecting one another.

But in this new world of social media relying on word-of-mouth distribution, Markham says you want a client like Kraft that is willing to try a range of new things. “They really get the idea that you have to do a lot of fun stuff and get various levels of success. But in this day and age it is so difficult to predict. No one can be confident of success in something that relies on word of mouth as a primary driver. You have to not put all your eggs in one basket and try a range of things.”