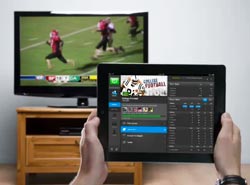 Two-screen viewing has taken hold. More than half (52%) of adult cell phone owners now use their devices for diversion, engagement or to connect with other people while watching TV. The finding comes from a new study by the Pew Research Center’s Internet & American Life Project based on a nationally representative survey of 2,254 Americans.

Almost three-quarters (74%) of smartphone users are what the Pew terms “connected viewers,” compared to just 27% of feature phone owners. The most common reason that people turned to their phones while watching TV was to occupy themselves during ad breaks, with 38% doing so. Among other activities people did in the prior 30 days:

watching, and 11% posted their own comments online about a program they were watching

*6% used their phone to vote for a reality show contestant

Young people who have grown up with devices at hand are especially avid multiscreen viewers -- 81% of mobile phone owners 18-24 fall into that category. But the vast majority of those in the 25-44 age group, and 45% of people 45-54, are turning to their phones in front of the TV as well.

Among other key demographic differences, the study found cell users living in more affluent households (earning $50,000 per year or more) and those with at least some college education were more likely to participate in interactive television experiences.

African-American cell phone owners participate in connected viewing experiences at a somewhat greater rate than their white counterparts (59% vs. 50%), and urban residents are more likely to do so than rural users.

“Thanks to the widespread adoption of mobile technologies, what was once a passive, one-way information flow is often now a social contact sport,” stated Aaron Smith, a co-author of the report.

Pew found that most cell owners are equally likely to use their phones for “distracted viewing,” regardless of demographic characteristics. Almost three-quarters  (73%) of those 18-24 using their phones to kill time during commercial breaks,  compared to only 27% of those 45-54. The young viewers typically most coveted by advertisers are tuning out TV spots.

Smith agreed, but said the effect isn’t the same as simply skipping past ads while using a DVR. “At least with the phone there is the opportunity for further engagement -- looking up a song that catches one's attention, being able to instantly go to a Web site, or take advantage of bargain, even if you weren't totally paying attention at the time,” he said.

Given the switch to the phone screen during commercials, marketers may increasingly respond by offering branded content, promotions or rewards through partners social TV partners, like Shazam or Viggle to capitalize on the two-screen habit.

Much of the research around two-screen viewing to date has focused on tablets, in part, because of their more media-friendly screens.