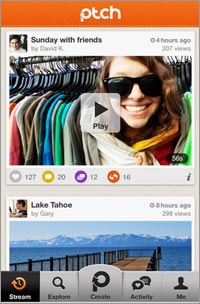 You are all social media collaborators now. Late last week a new app incubated by animation powerhouse DreamWorks Animation came into the iPhone App Store with a refreshing idea. Taking several steps beyond the Instagram or even SocialCam/Viddy model of instant media editing, Ptch is an engine that assembles a polished multimedia production from your own images and video.

That basic piece actually works quite well. I was able to pull together, caption, edit and post clips and stills from my recent Italian misadventures to a “Ptch” in under a minute. Like Instagram, you can apply a film filter to the production, so that it can look “vintage” or even progress as a kind of animated comic book. The app pulls media from both your phone and your social feeds, so you can assemble video and stills from Instagram, Twitter, Facebook, Tumblr, and Viddy.

The engine brilliantly weaves together the media, applies Ken Burns slide zooms, and lays over an audio track. The internal video editor is easy-peasy. Bam -- you are a filmmaker. At its heart, the app demonstrates both the raw processing power of a modern smartphone and the ways in which app developers can help a user polish and primp user-generated content.

But the really interesting part of this Ptch is that the productions then become fodder for others to modify. You can explore the creations that others post and then remix and “re-ptch” it yourself. They are calling it “living media” and a “new way of storytelling.” I am not entirely sure that playing around with strangers’ media is going to take fire. In the first few days I didn’t come across much evidence of re-ptching. Nevertheless, the collaborative element could be a powerful incentive for video collaborations among one’s own social graph. For instance, each of my family members on the Italian trip (nine in all) had digital devices that were snapping and recording along the way. One can imagine at least several of us ptching and re-ptching a compilation production among us.

One of the big hurdles that video editing applications have to leap is video itself. Unlike still photography, video recording is not the same reflex. Finding ways to make video uploading more rewarding and compelling for a wider swath of users is job one for this category.

But as the recently acquired SocialCam demonstrated quickly, these user-generated video engines are compelling for brands on many levels. SocialCam saw major sports teams and athletes, brands like GE and others shoot to the top of its leaderboards because the app became a broadcast mechanism for cool clips. Imagine how brands might leverage a mash-up engine where branded video and still assets could be made available for remixing, best-video contests, etc.

That DreamWorks is involved in this app also shows how major media companies can see themselves as players in user-generated social media. Who better to give users the tools to polish and professionalize their work? And what better way is there for a movie company to advertise its own brands than to put in the hands of users' filters, assets, tools that help them play and post media out of the company’s next big release? How long before we see the Shrek and Madagascar filter set?