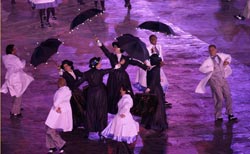 At some point during the homage to health care, as nurses pranced, doctors shuffled and small children bounced on trampoline-enhanced hospital beds, I turned to my wife and said, “I really hope that we aren’t the only people on earth who think this is achingly bad.”

She couldn’t respond. Her mouth was agape as the logo for England’s national health care organization was spelled out in lights on the Olympics stadium floor. “Wait -- there’s a Voldemort blow-up doll.”

Honest -- at this point I was thinking -- Mary Poppins. And when scores of them appeared I thought I was in bizarro Ghostbusters-land where my random memories were being activated in real-time at the Olympics by some fourth-dimensional force. I was desperately trying not to think about the Spice Girls at this point.

I have to say that generally I am not a big fan of the social media streams used by most second-screen apps. I find the endless scroll of comments, usually pouring from Twitter hashtags, to be hard to track and un-insightful. But I was desperately looking for validation. I cracked open the Twitter app in the iPad. Luckily, the search function had surfaced #openingceremony.

My expectations regarding user-generated real-time content were happily thwarted by an audience of like-minded, dumbfounded viewer/tweeters who proved to be more creative and cogent than ceremony director Danny Boyle. They saved me from the pain.

“The first time I was glad Freddie Mercury was dead…so he doesn’t have to see this.” (@MarylandMudflap)

“Downton Abbey has completely jumped the shark with this episode.”  (TheFakeESPN)

“A billion people are watching around the world and 999 million of them are confused.” (thomastowell)

“This is the part of UK history where they terrorize orphans.” (PeytonsHead)

“How is WTF not trending?” (EricStangel)

“Am wondering what drugs are legal in the UK that aren’t in the US.” (LizB)

“Plot twist: the Queen locks everyone up in the stadium and says, Happy Hunger Games.”

To be sure, if you scroll through the Twitter feed to the UK-sourced posts during the live ceremony in Britain you get a much different take. There are more than a few “up yours” to Mitt Romney and Tories generally, as well as love for the Queen as the new Bond Girl. Still, “They’re nailing the tenured British history professor demographic so far” was my personal favorite.

For me, at least the second screen served an important function. It punctured the decades-old bubble of the suburban nuclear family and its lonely living room by putting audience on-demand. It takes a village to talk you down from a bad trip.