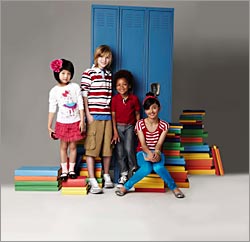 While many of this year’s back-to-school spending trends will be as predictable as new sneakers and three-ring binders, the National Retail Federation reports there are some new patterns that will drive spending higher. As a result, the NRF is predicting a 14% gain in spending this year.

Among them, the Washington, D.C.-based trade group reports, are record levels of children in elementary and middle school, with three out of 10 Americans reporting they have kids in this bracket. And that will drive purchases of clothing, school supplies and electronics higher. And at the other end of the parenting spectrum, more kids are fleeing mom and dad -- with one-quarter of college-age kids living on campus, leaving empty nests behind them. The NRF says that is the highest percentage in the history of its survey.

And while 85% of the parents it surveyed say that the economy is still a major factor in how they plan to shop, six in 10 plan to make at least some of their purchases at department stores this year, also the highest in the survey’s history.

But don’t count out the discounters. “Discounters and big boxes are poised to be the biggest winners,” writes Ted Vaughan, partner with BDO USA LLP’s retail and consumer products practice, in a report on back-to-school spending. “Retailers are pulling out the stops to attract cost-conscious shoppers seeking both classroom supplies and less-basic items, such as apparel. Wal-Mart has begun to offer select school supplies at 88 cents, while K-Mart has launched a program offering gas discounts and flu shots to customers spending $100 or more on select items in stores.”

And as online shopping continues to gain favor for BTS, it is also helping to increase sales, with online shoppers saying they plan to spend $874 on back-to-school shopping, 27% more than overall average. “Millennials will complete a sizable portion of their back-to-school shopping online,” adds Vaughan. “Incoming college freshman will be at the forefront of this trend. Initiatives like Target’s uStyler and the ease of comparison shopping online will continue to pull consumers from brick-and-mortar stores to online shopping portals.”

But the NRF has also spotted a quirky counter trend, reporting that for college students, the catalog is making a comeback. Some 15% of the college kids included in its survey intend to shop from a print catalog, triple the number who did so back in 2003.