Ford's Piaskowski: Premium Design Is Not An Elective 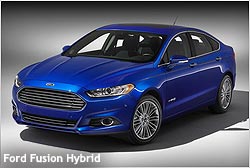 Ford's new Fusion sedan started winning awards before its wheels met asphalt. A lot of it has to do with the vehicle's stunning good looks, a fullness of design that is usually the imperative for products in the rarefied world of Aston Martins, Citation jets and Patek Philippe, where products are judged as industrial art.

The truth is, the Fusion has a lot of competition. The midsize car segment, where vehicles were once routinely derided as lozenges and appliances, no longer evokes yawns. The new(ish) Volkswagen Passat and the Hyundai Sonata, Genesis, and Elantra are examples of a design-forward orientation in the mid-size arena.

Joel Piaskowski, Ford's director of exterior design, would know. He came to the Dearborn, Mich. automaker in 2010 from Hyundai Motor America's Irvine, Calif., design studio, where he was involved with the design of the Genesis. That vehicle was the first to evince the Hyundai "Fluidic Sculpture" idea that now informs the lineup and set the bar for the segment. He tells Marketing Daily that in spite of the importance of practical considerations for new-car shoppers, especially post-recession, design is critical.

"People purchase vehicles with their hearts and minds; there's a real emotional connection you have with an automobile," he says. "You have to have an attachment; our job is to seduce the customer with the visual appeal of the car and then, once they are in it, we have to capitalize on that with the interior environment."

Piaskowski was in New York on Tuesday to attend Ford's "Wall to Wall: The Fusion Collective," a bicoastal multimedia art and performance happening at Milk Studios. The event, a month before the Ford Fusion launches nationally, is meant to mirror Ford's use of virtual reality technology, sustainable materials, and exterior design and the in-car environment, and showcase the Fusion, which will be on display.

"The mid-size car segment in North America is the most popular and most crowded it has ever been, so you need design as a differentiator." He says the essential design challenge realized by Fusion, whose look will be the new face of Ford vehicles going forward, is the idea of aspirational premium. "It still maintains its attainability; its visual 'premiumness' doesn't mean you have to spend a lot. It's the full culmination of elements that appeal to the senses."

That look, which is also realized in the Fiesta and new Focus, is partly, he says, a "polished pebble" look where no elements are superfluous and the whole thing is three dimensionally holistic, rather than looking good only at certain angles or profiles. "The Fiesta, Focus, the new Fusion are vehicles you have to experience in their physicality. To see it in 2D you don't get same idea of their sculptural quality. Basically, these cars have been designed in all views to be great seen from all perspectives."

Piaskowski says the importance of events like the "Wall to Wall" program at Milk is not just to get the vehicle in front of people but to reach people who normally wouldn't be surfing Ford.com. "It's about the social platform, that brings in people who wouldn't have been interested in the brand. It's an environment that's near and dear to their hearts as artists. We are playing on their turf, if you will."

After the two-day events in New York and Los Angeles, the program will travel to art and design schools around the country.

Artists involved in the event include Matthew Williams, former creative director for Lady Gaga, and fashion and conceptual artist Cyril Duval, who use blogs, photos, video diaries and other interactive content.

As part of the event, Ford will debut a short documentary featuring Pharrell Williams and Tyson Toussant from Bionic Yarn, the company that produces super-strong, fast-drying fabric made primarily from recycled plastic bottles.

activism, automotive, design, events
1 comment about "Ford's Piaskowski: Premium Design Is Not An Elective ".
Check to receive email when comments are posted.
Next story loading